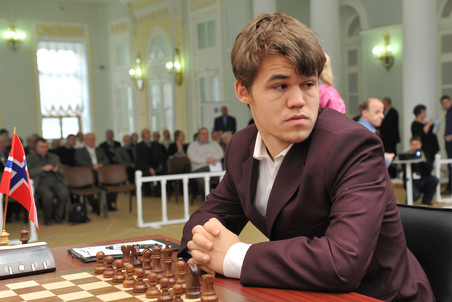 Magnus Carlsen from Norway is obviously the most discussed chess player in the world. His performance in 2009 was excellent - he won the first London Chess Classic tournament and reached the top part of the world rating list. He improved Karpov's and Kasparov's achievements and become the youngest player ever to reach the 2800 rating (only five players in the world could reach this step). He repeated this again in 2010 proved that was not just a fortuity. They say Veni, Vidi, VICI but even Julius Caesar only conquered England once! And now Magnus is on the threshold of the new record. The 3rd London Chess Classic tournament has begun, and if Magnus wins he may be called Maximus (the Greatest).

Carlsen attracted everyone's attention straight after his very first game and made people consider him the future world champion. He became Grand Master at the age of 13 years, 4 months and 27 days. The same year (2009) he made the impossible again. In Nanking Pearl (the tournament in China) in September he gained 8 out of 10 possible scores and won all games that he played with white figures. Let us notice that the same year Gary Kasparov played a role in his training. In 2010 Kasparov continued to help him, and Carlsen won his first international prize at the prestigious Corus tournament in Wijk aan Zee, Netherlands. In 201 his main success took place at Medias tournament in Romania, where he beat his young opponent Sergey Karyakin by tiebreaker. Carlsen started playing chess in the Norwegian College for sportsmen, the NTG. His teacher was M. Seaman.

Carlsen lives close to Oslo with his parents and two sisters who regularly travel around the world with him and support him. Carlsen is the football fan and supports Real Madrid. Before making his so good showing in chess, he played football, skied and showed very good performance in ski-jumping. Magnus Carlsen is also famous for his working as a model of G-Star magazine. You may see his face on the big advertisement hoardings in London.

The 13th world champion Gary Kasparov always said that the 13 was his favourite number. But, maybe, his time has passed! Today, 13 is also Carlsen's favourite number. He won the two London Chess Classic tournaments with very this number of scores.

NIGEL SHORT - 20 YEARS OF PERFORMANCE FOR THE ENGLAND NATIONAL TEAM
He became the Grand Master at the age of 19. Nigel Short was the child prodigy and the most cognate person in the British chess world. He made the
Levon Aronian Big chess master
Aronian was born on 6 October 1982 in Yerevan. He was taught chess by his sister when he was 10. Levon Aronyan, along with Magnus Carlsen and
NAKAMURA HIKARU - LIFE AND CHESS VICTORIES
Hikaru Nakamura, the twice USA champion is called H-Bomb for his straight-out style of game. He is considered one of the best players of the
Anatoly Karpov the great chess player
Anatoly Karpov was the world champion from 1975 and 1985. His highest ELO rating was 2780. The eminent player is the chess legend; he participated
Information
Users of Guests are not allowed to comment this publication.