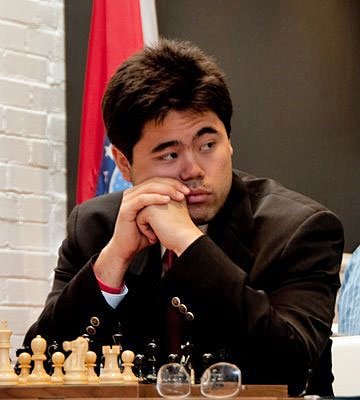 Hikaru Nakamura, the twice USA champion is called H-Bomb for his straight-out style of game. He is considered one of the best players of the world, particularly in blitz chess, where Nakamura is no. 1 of ICC (Internet Chess Club). He is virtually invincible in so-called Chess Pool where each player is given one minute of playing time.

Hikaru always plays for victory and never offers a tie. He became Grand Master at the age of 15 and was compared to Bobby Fisher many times. He resembles Fisher in his desire to learn on his own mistakes.

In summer 2009 Hikaru played in a series of tournaments in Europe, and succeeded a lot. One of his achievements was the victory in San Sebastian tournament when he passed ahead of many strong rivals. After that, Hikaru went to Mainz, Germany, where he won the unofficial world championship Fischerrandom Chess; in this kind of game the figures are set also on the 1-2 and 7-8 lines but in random order, as desired by the player.

The year 2010 was also successful for Hikaru. His performance for USA National Team was good and he also succeeded in Corus, Wijk aan Zee tournaments. After all those tournaments he participated in 2010, he reached the top 10 of the world rating list.

The important chess victory of Nakamura

In 2010 Nakamura was the first in Wijk aan Zee (Tata Steel) with the 9 out of 13 result and took a lead over four players with highest rating in the world: Carlsen, Anand, Aronian and Kramnik. As Hikaru works tightly with Gary Kasparov, he got the good praises from the latter for this victory. Gary Kasparov reminded us that Bobby Fisher never won the tournament with the valid world champion participating.Later this year, Hikaru beat the FIDE world champion Ruslan Ponomarev in the match consisting of 6 games. This match was played in Sent Luis, Missouri (the place where Hikaru lives now).

Nakamura Hikaru was born in 1987 in Hirakata, Japan. His got the home education in USA. He plays tennis and studies financial markets when he has free time. He is interested in mathematics and history. He is the author of the Pool Chess: One minute book. You may find him in twitter - @GMHikaru. His stepfather Sunil Viramantri is one of the best juniors trainers in USA.

Alexander Grischuk and his chess life
Alexander Grischuk is one of the best chess players in the world today. He was born on 31 October 1983. At the age 28 he has a lot of
Anatoly Karpov the great chess player
Anatoly Karpov was the world champion from 1975 and 1985. His highest ELO rating was 2780. The eminent player is the chess legend; he participated
Levon Aronian Big chess master
Aronian was born on 6 October 1982 in Yerevan. He was taught chess by his sister when he was 10. Levon Aronyan, along with Magnus Carlsen and
NIGEL SHORT - 20 YEARS OF PERFORMANCE FOR THE ENGLAND NATIONAL TEAM
He became the Grand Master at the age of 19. Nigel Short was the child prodigy and the most cognate person in the British chess world. He made the
Information
Users of Guests are not allowed to comment this publication.