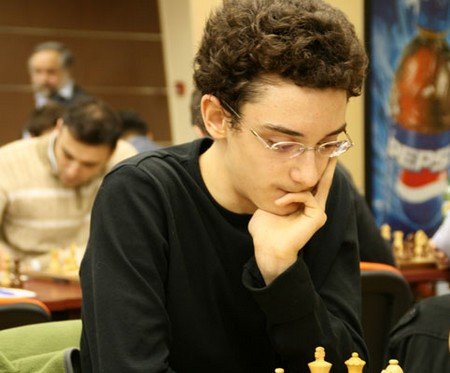 Fabiano Caruana was born on 30 July 1992 in Miami, Florida (his father his American and his mother is Italian). When he was four, his family moved to Park Slope, Brooklyn, where, by the way, Bobby Fisher lived his youth. His parents revealed his chess talent when he was approximately five years old. Fabiano played his first tournament in Quinx. Up to 12 years he lived and played in USA and seldom participated in the tournaments in Europe and South America. His first trainer was Bruce Pandolfini and Fabiano was just six.

From 8 to 12 years old he was trained by the Grand Master Miron Sher. He attracted the attention of the chess fans in 2002 when he won the tournament held in New York. The same year and the next year he won two Pan-American junior championships. In 2004, at the age of 12, he moved with his family from New York to Madrid to dedicate himself to the chess. Initially, he was trained by the International Master Boris Zlotkin in Madrid, and then by Alexander Chernin (who is his trainer at present time) in Budapest, Hungary, where his family moved in 2007.

In April 2006he was entitled the International Master. He was second at his first Italy Championship (Cremona 2006). In 2006 he also won the tournaments in Madrid and Alcala de Henarez. In 2007 Caruana won three consecutive Budapest First Saturday chess tournaments (March, April and June). On 15 July 2007, at the age of 14 years 11 months and 15 days Fabio Caruana became the youngest Grand Master in the Italian history, and one of the youngest Grand Masters in the world. Caruana is the fifth Grand Master in Italy.

Anatoly Karpov the great chess player
Anatoly Karpov was the world champion from 1975 and 1985. His highest ELO rating was 2780. The eminent player is the chess legend; he participated
David Howell young chess talent
The youngest Grand Master in Great Britain, David Howell (he is 21) from Sussex, was granted this title at the age of 16. He was the youngest
Anish Giri
In January 2011 Anish Giri reckoned among the chess elite. At the moment he is one of 30 strongest chess players in the world.
Grand Master from Moldova Viorel Bologan
Viorel Bologan is one of the most successful and famous chess players from Molvova.
Information
Users of Guests are not allowed to comment this publication.