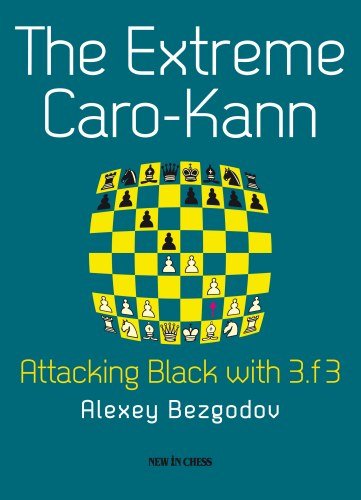 For more than a hundred years, the Caro-Kann Defence has had the reputation of being solid, reliable... but a bit boring. This was expressed best of all back in the 1970s by the young Anatoly Karpov, who was then only just storming the heights of world chess: 'This defence has always struck me as rather depressing in its passivity'. Within a decade or two, it became the main opening for the legendary twelfth world champion! The defence has achieved enormous popularity, and its reputation as prospectless has been reduced to nothing. We need some new ideas, or, at least, ideas that have been hidden, to strengthen White's hand.

At the present moment, a frequent White choice after 1 .e4 c6 2.d4 d5 is the natural development of the king's knight. After the equally natural exchange on e4 and development of the bishop to f5, the long theoretical variations end in an equality that is welcome for Black.

Somewhat more popular is 3.e5. However, in this case too, Black can solve his main problem, which is the development of the c8-bishop. By drawing the white pawn to e5, the bishop gets a splendid and active post. This, and this alone, is the main point of Black's whole set-up. Note that for die sake of achieving this, Black puts his pawn on the modest square c6, taking away the best development square for his queen's knight!

White has similar issues in the Panov Attack. After 1.e4 c6 2.d4 d5 3.exd5 cxd5 4.c4 Nf6 5.Nc3 Nc6 6.Nf3 Bg4! there have already been many hundreds of draws, in long forcing variations. And note once again that the development of the bishop on c8 is a sign that Black has solved most of his opening problems.

But now to our main topic. There is a variation, which allows White to complicate the life of the enemy bishop to the maximum extent, preventing it developing easily. This is the old variation, known since the 19th century, 3.f3 !

One can easily imagine an inexperienced player asking 'What sort of nonsense is this? Just to stop the bishop getting out, we deprive our knight of its best square on f3?' But I would remind you that Blacks very first move does exactly this to his queen's knight! So in this regard, the opponents are quits! The pawns on e4 and d4 look both proud and also effective. And the bishop on c8! The main hero of the Caro-Kann, it has nowhere to go, a bit like some of the heroes of the 19th century Russian literary genius, Fyodor Dostoyevsky.

Let us think about what is happening. Black is done out of his main idea and needs to think anew, in completely different (and, in some ways, unpleasant) circumstances. Because the bishop has nowhere sensible to move to, he must move something else. The situation has become hard to predict and unusually interesting, right from move three. By conceding the centre, Black can start to fight for the initiative, but White is rather well prepared for such a battle! On the other hand, if Black plays more slowly, then White's space advantage may in the near future be strengthened and become the source of problems for Black.

I would point out that the name The Extreme Caro-Kann was invented by me in February 2013. The word 'extreme' has two meanings:


This book is devoted to an unusual treatment of the Caro-Kann as White, involving the move 3.f3!?. Although Grandmaster Geza Maroczy played this move back in the 19th century, even to this day by no means all devotees of the quiet and solid Caro-Kann are prepared for it as well as they should be. The modest, apparently even somewhat pointless move of the bishop's pawn, has not in the course of 100 years joined the list of the most popular continuations. And few people remember that it was a strong weapon in the hands of one of the most 'positional' of all world champions, Vassily Smyslov, a player who practically never played moves which do not meet the demands of the position. In our day, it is played by many strong players, at least occasionally. I will show some of the games of elite players in this chapter. Increasingly, black players are coming to understand that the move 3.f3 is not just a joke or a fad. Even substantial preparation is not always enough to guarantee Black against misfortune in the opening. I would add that the Maroczy-Smyslov system is not only creative (like all worthwhile openings), but is developing rapidly. More and more experts are taking part in the discussion Tor' and 'against' this at one time shocking move. But the extent of the analytical exploration of this move is negligible, compared with other, more topical variations. I have spent a lot of effort on the line (not just for White, but for Black as well, in order to find the best responses). Overall, White's chances in this variation seem to me preferable, whilst the variation can be recommended to anyone who enjoys creative searches and is not afraid of risk.

In our day, many players who deserve the epithet 'great' have shown an interest in the brainchild of Messrs Maroczy and Smyslov. I would mention Vassily Ivanchuk, Alexander Morozevich, Judit Polgar, Ian Nepomniachtchi, Artyom Timofeev, Denis Khismatullin, the young women's world champion Hou Yifan... The list is easy to begin, but hard to complete, especially as the number of adherents of the variation continues to grow sharply.

I hope daat many of diose who read my book will take into their arsenal the study and practice of this fascinating chapter of modern opening theory!

The Caro-Kann, Lars Schandorff - download book
The Classical Caro-Kann and, some will say, the real Caro-Kann. Black voluntarily gives up his centre with 3...dxe4 to later bring out his
Beating the French, Lane Gary - download book
The surge of popularity in the Advance French during recent years has seen it become one of the most challenging openings available. The question
The King's Indian: A Complete Black Repertoire, Bologan - download book
An excerpt from the first chapter    We will begin our survey of the King's Indian Defence with the so-called "sidelines". Their name
Philidor Files: Detailed Coverage Of A Dynamic Opening - free download
In the 18th Century, chess strategy was at its very beginning. Direct attacks against the enemy king were common and romantic players didn't care
Information
Users of Guests are not allowed to comment this publication.