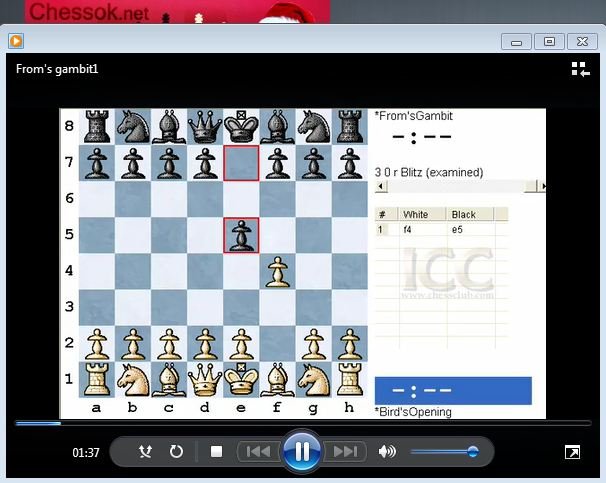 From's gambit is the perfect way to play against the Bird debut 1.f4. Blacks sacrifices the pawn and starts to dangerously attack the opponent's King. I played the debut once, and after 1.f4-e5 2.fe-Nc6 3.Nf3-g5 had to wait for 40 minutes! I did not know how to play further; but it was long time ago and since that I have played the From's gambit many times. Through the whole chess practice of mine, I never lost in this debut.

The Scotch game
The Scotch game is the open, live and dynamic debut with lot of challenge in the centre and with mutual chances for both opponents. This debut is
Volga (Benko) gambit - download video
We keep on presenting our video lessons series. And the next gambit we will review is Volga gambit. This gambit is very complex and just watching
Kings gambit. Bishop's gambit
Bishop's gambit. What can we say about this gambit? If you want the adrenaline you will get it. Why adrenaline? Just look at how this debut starts
Albin countergambit
Albin countergambit is a very rarely used opening that leads to double-edged challenge with the better chances for White. This used to be the
Information
Users of Guests are not allowed to comment this publication.