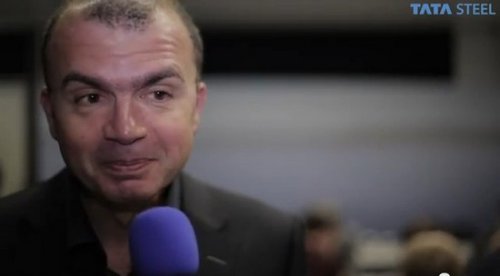 Ivan Sokolov is very well-known Grand Master who has quite serious results and achievements in his chess career. Today, Ivan Sokolov is treated as one of the very strong Grand Masters who is able to withstand any of the players belonging to "chess elite". However, his unsuccessful performance in the course of Tata Steel 2013 tournament showed that today his level is a bit lower than the one of top 10 players.

He was born on 13 June 1968 in Yugoslavia; his father was Bulgarian and his mother was Croatian. After Ivan started playing chess, he immediately attracted attention. His good intuition and fast decision making brought him numerous victories.

Soon after that, Ivan started participating in big tournaments and was entitled the FIDE Master in 1985. Then, he won the Master International tournament in 1986. This was his first serious achievement; the next victory followed immediately – he became the winner of Vidmar Memorial in 1987. It should be noted that Ivan won the same tournament in 1993, as well.

However, the biggest Ivan Sokolov's victory took place in Wijk aan Zee in 1999, when he beat Garry Kasparov.
Today, Ivan is in top hundred chess players of the world. His FIDE rating is 2663 and the maximum rating was 2706 in 2004. Ivan Sokolov performs under Dutch flag.

Grand Master from Moldova Viorel Bologan
Viorel Bologan is one of the most successful and famous chess players from Molvova.
Alexander Grischuk and his chess life
Alexander Grischuk is one of the best chess players in the world today. He was born on 31 October 1983. At the age 28 he has a lot of
Sergey Karyakin chess child prodigy
Sergey Karyakin was born in Ukraine, but at present time he plays for Russia and in Russia. He is considered to be one of the best chess players and one of
Alexei Shirov biography
Alexei Shirov is one of the players belonging to the chess elite of today. His best result that he achieved in 1998 is the fourth place on the
Information
Users of Guests are not allowed to comment this publication.