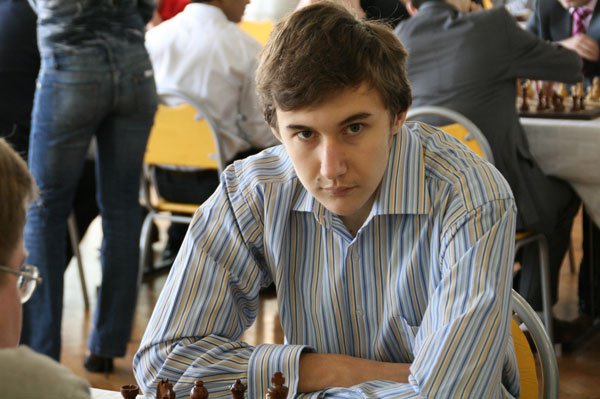 Sergey Karyakin was born in Ukraine, but at present time he plays for Russia and in Russia. He is considered to be one of the best chess players and one of those making the modern chess elite.

He was born in 1990 and became a Grand Master at the age of 20. Sergey started playing chess when he was 5 years old. When they revealed Sergey's talent, the trainers started giving him lessons and he studies systematically, under very stringent supervision. Today, after almost 15 years, he reached to the rating of 2747.

He was also known as the chess child prodigy. Among his earliest achievements was the U-12 World Championship triumph; as the result of this, he granted the title of the International Master. Due to his high results, Karyakin now has the opportunity to play with the most famous players in the world. Among the Karyakin's best performances are the World Cup (2007), World Chess Championship (2009), ACP RapidWorldCup (May 2010), Corus chess tournament and many others.

Alexei Shirov biography
Alexei Shirov is one of the players belonging to the chess elite of today. His best result that he achieved in 1998 is the fourth place on the
Evgeny Tomaschevsky eminent chess player
The famous Russian Grand Master Evgeny Tomashevsky was born on 1 July 1987.
NIGEL SHORT - 20 YEARS OF PERFORMANCE FOR THE ENGLAND NATIONAL TEAM
He became the Grand Master at the age of 19. Nigel Short was the child prodigy and the most cognate person in the British chess world. He made the
Alexander Grischuk and his chess life
Alexander Grischuk is one of the best chess players in the world today. He was born on 31 October 1983. At the age 28 he has a lot of
Information
Users of Guests are not allowed to comment this publication.