Rocking the Ramparts: A Guide to Attacking Chess - download book 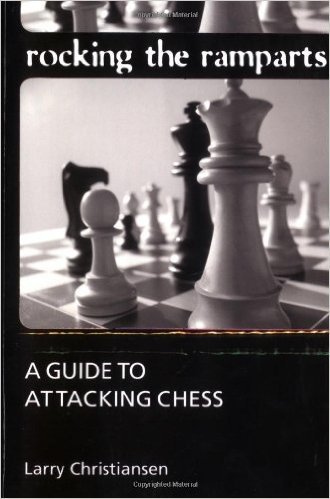 How to improve your combinative skill

Unquestionably, tactical skill is an essential ingredient for successful attacking play. There is no easy way to develop sharp, tactical ability but I can suggest the following as methods for improvement.

First, you have to get a real handle on the nuts and bolts of tactics pins, double-attack, forks (a unique form of double-attack), discovered attack, discovered check, double check, interference, and the basic checkmating patterns. I developed much of my early tactical skill by reading combination books by Fred Reinfeld till the print wore off the books. My early opening systems, such as they were, were all open 1 e4 and 1 e4 e5 lines that put a premium on quick development and alertness to dangers inherent in open positions. I developed a healthy fear of gambits and sacrifices after some painful losses. I quickly learned that it is usually good policy to return a gambit pawn for the sake of development

All players would benefit by constantly challenging themselves with tactical problems, whether in books, magazines or quick games at the club or on the internet. As a youngster I would sometimes spend an afternoon devouring books on tactics and combinations at the Riverside public library. The weekly chess columns by Kashdan and Koltanowsky always got my attention and I would spend Sunday mornings playing over the latest international games, even if they were pretty much of a mystery to me.

Eventually I became very familiar with most of the basic tactical themes. I learned that loose, unguarded pieces were to be avoided. I kept extra vigilence when opposing knights established outposts. Cheap bishop sacs on h7 and f7 occurred with diminishing frequency against me. In sum, by age 14 or so I had a strong sense of danger and opportunity when sitting down at the board.

One extremely important point I wish to emphasize is to always look at forcing moves. A forcing move is a move that demands a response from your opponent. Any sacrifice, no matter how large, which draws out the enemy king, should be contemplated to its logical conclusion. Naturally, many of these will be unsound, but a surprising number of them do work or come very close. I have seen literally hundreds of wasted opportunities by club players who lazily fail to examine this type of sacrifice. Of course the intensity of your examination of forcing moves is influenced by factors like the time control and your physical stamina. Some players will try to calculate to the absolute very end of various tactical possibilities. As a player, I tended to calculate fairly deeply but I would often abandon a tactical possiblity when it just seemed to lose its 'feel*. I would assume 'that can't work' based on earlier experiences in similar positions. That has cost me a few points during my career, but has spared me the nerve-racking time pressure imbroglios that typically plague the calculating machines.

Now let's get to the action! I will focus initially on the vital subject of attacking the king with direct assaults. Let's start with the subject of 'king in the center'.

A king in the center is particularly vulnerable to attack. The aim of most openings is to get your pieces out, put up a pawn stake in the center, castle and connect rooks. In my mind, the opening is not completed until that magic moment when the rooks are in communication with each other. Delay in bringing the king to safety is a recipe for disaster. There are thousands of chess horror stories involving kings in the center.

303 Tricky Chess Tactics - download book
Strategy is your overall plan in any given position towards a specific goal. While it is often an aggressive plan, it can also be defensive,
Chess Exam and Training Guide: Tactics: Rate Yourself and Learn How to Improve
This book is designed lo provide information on understanding tactical ideas and evaluating tactical skills, as well as various training methods.
The Chess Kid's Book of Tactics - download book
This book is based on two big ideas: The chess player who knows tactics beats one who doesn't; Tactics are based on basic patterns that can be
Mastering Chess Tactics - download book
Making a successful combination is one of the most enjoyable parts of a game of chess. I still have the scoresheet of my first ever combination
Information
Users of Guests are not allowed to comment this publication.