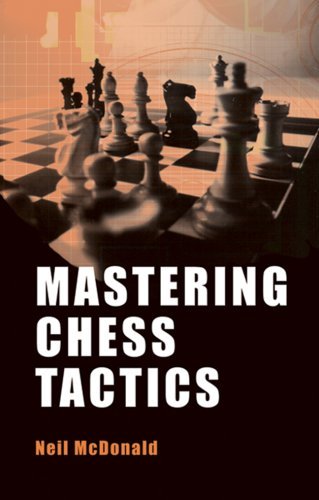 Making a successful combination is one of the most enjoyable parts of a game of chess. I still have the scoresheet of my first ever combination which was made when I was a relative newcomer to chess. It was a two move knight fork which won my opponent's queen. With all the modesty of youth I later wrote 'a brilliant finish, though I say it myself!' in big red letters on the scoresheet. My sense of elation was understandable. Up until then I had been the victim of many combinations and here at last I had grasped the mechanics of preparing a combination of my own. It was a great moment and I felt very proud of myself.

The good news is that tactical skill can be learnt. There may be a lot of beauty and depth but there is no magic or mystery even in the most profound sacrifice. I had three aims in writing this book:


Some tactical ideas are simple to calculate, but difficult to see in the first place. If there is a win present in the position but you have never seen the necessary tactical idea your task becomes the chess equivalent of reinventing the wheel-a laborious and time consuming business, and you may not even succeed in doing it!

This is an impressive statement, high sounding and full of authority; it is also wrong. After all, if Sergeant had no wish to find out the secret of Morphy's genius, why did he write a book on him? We all want to know what makes an artist tick, whether he is a painter, a song writer or a sportsman. In this book I have made liberal use of the games of Garry Kasparov, the greatest star of our age, who shows an absolute mastery of all forms of chess combination

Remember that some of the greaiest chess minds in the world such as Kasparov himself. Shirov and Morozevjch fall victim to the combinations given here. So don't worry if you don't understand everything the first time you read this book! It may well be that you will come back to it at different points in your chess career and each time you will understand a bit more.

I have tried to describe every single tactical operation that a player might face or need to use in a game. Whenever I couldn't find a notable example in the published games of the great masters or wanted additional material I have referred to my own humble games, both won and lost. I hope ! will be forgiven for this indulgence.

Whatever our strength if we learn the basics of tactical play we can sometimes carry out what would have seemed before to be a chessboard miracle. I hope this book gives you a lot of fun and provides you with the ammunition to make some Kasparov-like combinations!
Neil McDonald Gravesend, England

303 Tricky Chess Tactics - download book
Strategy is your overall plan in any given position towards a specific goal. While it is often an aggressive plan, it can also be defensive,
Rocking the Ramparts: A Guide to Attacking Chess - download book
How to improve your combinative skill    Unquestionably, tactical skill is an essential ingredient for successful attacking play. There is no easy
Understanding Chess Tactics - download chess book
When my friend and former pupil Martin asked me to write a foreword to his book, I did not expect that I would learn so much from reading this
How to Calculate Chess Tactics, Beim Valeri - download book
We begin by identifying the essence of the matter under consideration. It will soon become apparent that, although the term 'tactics' appears on
Information
Users of Guests are not allowed to comment this publication.