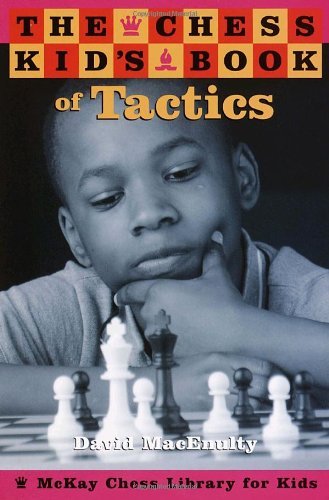 This book is based on two big ideas:


Many of the tactical puzzles in this book were used to train young players on our chess team at Community Elementary School 70 in the Bronx. These remarkable children went on to become New York City, New York State, and National Champions.

Our team dedicated a lot of time to understanding the basic patterns of chess tactics. We also worked on openings, endings, and checkmate patterns, although these are not covered in this book. While each of those areas is very important, and I look forward to sharing our techniques in future books, I believe that learning tactics is the place to start. This book focuses on the tactical patterns that can occur in any game of chess. The intent is to give the beginner who just knows how the pieces move a thoroughly practical and enjoyable way to get better quickly.

There is a famous quote that chess is 99% tactics. Understanding many of the common checkmate patterns depends on certain tactical ideas, and many opening ideas are based on tactical considerations. One of the few times my team was beaten in a match was when I had been focusing on openings and neglecting tactics. We had great positions out of the opening, but our opponents beat us with superior middle game tactics. We immediately shifted our training back to tactics, and three weeks later we won the National Championship in two different sections (K-5 Championship and K-6 JV).

When I first started teaching, I was frustrated by the search for material on tactics. Most of what was available was either too difficult for beginners, or was not thematic in approach. I couldn't find a book that broke the patterns down in the way my beginning students needed. I started borrowing a little here, a little there, and finally realized I would have to create my own book. The more I learned about teaching, the more I learned what my students needed, and the better I was able to construct puzzles to help them learn better. I realized that what I had been doing was making puzzles for chess that are similar to the exercises musicians have been using for centuries.

My first training was as a musician. I spent thousands of hours practicing scales, intervals, and many other exercises to master my craft. These technical exercises are based on the idea that musicians' fingers and ears must have an automatic response to the thousands of musical patterns they perform. Since repetition is the mother of retention, musicians practice these patterns over and over and over.

This book, then, is a chess version of music technique books. First, the student is given a very basic idea, or pattern, and then they have a chance to practice it with many examples. Just as a musician learns to play one note, then another, then a third, and then joins them together for a simple tune, chess players must learn one pattern, then another, and then join them together for a connected series of moves.

Musicians need ear training; chess players need eye training. We need to be able to see patterns on the chessboard just as a musician hears patterns of sound. This can only be done by repetition. We must see the pattern many times in many variations before it becomes an automatic part of our repertoire. Indeed, pattern recognition is the key to success in every field. From woodworking, house painting, and writing to horseback riding, business, and medicine, people perform best by understanding patterns.

I strongly suggest that, just as a musician practices an exercise many times, the student go through this book many times. The more times he or she sees a pattern, the more that pattern becomes intuitive.

At this early stage in a chess player's development, verifying the answer is critical. For this reason, I have provided answers at the bottom of the page. The student can quickly check the answer without having to go to the end of the chapter or the end of the book to find the correct move. The print on these answers is intentionally small, so the student can easily cover the answers while trying to solve the problems. Check your answers! After verifying the answer, look at the pattern again to lock the picture in your brain.

At the end of each chapter, there are a few games featuring the tactic presented in that chapter. In each game, one player makes a significant error. Errors in chess frequently invite a tactical shot. A large part of winning at chess is taking advantage of the mistakes of your opponent. Some of the errors in these games are clearly the moves of total beginners, whereas others are a bit more subtle.

The final section of puzzles, Mixed Tactics Part Two, starting on page 155, are a significant step up in difficulty from the earlier ones. In the earlier puzzles, the tactic is simply there, waiting for you to find it. In the final section, the student must find the move that sets up the tactical trick. These will require a lot of thought and a lot of patience two qualities chess players are known for.

If the final puzzles seem coo difficult at first, students should put the position on a board and try to figure it out with all the relevant pieces in front of them. Ideally, they should try to solve the problems without moving the pieces. The trick is to do them in their heads, as if they were playing a real game with a live opponent. This takes a lot of practice, but the rewards are well worth the effort.