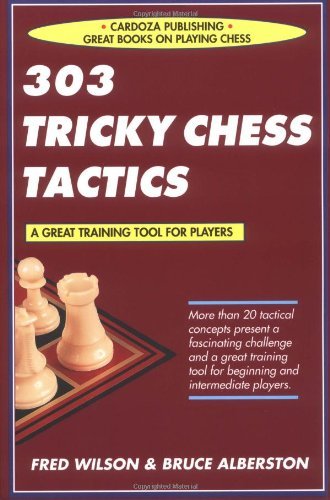 Strategy is your overall plan in any given position towards a specific goal. While it is often an aggressive plan, it can also be defensive, depending upon your analysis and understanding of the needs of the position.

Tactics are short-term maneuvers which always involve either threats, captures or combinations. Since the majority of good tactics are created with successful combinations, this term also requires a clear definition: A combination is a tactical maneuver in which you sacrifice material to obtain an advantage, or at least to improve your position. So strategy then, is your general plan, while tactics are your specific means of carrying it out.

You would think it would be obvious that studying basic tactical themes is essential for improvement at chess. Although you obtain winning positions with correct strategy, you almost always need to resolve them in your favor with a clever tactic. In fact, we would go even one step further: At every level, from beginner through grandmaster, it is impossible to increase your overall strength without a corresponding increase in your tactical ability.

What is unbelievable to us is how many amateurs believe they can improve at chess without assiduously studying tactics (presumably you are not one of them or you wouldn't have read this far!). Imagine trying to become a good baseball player without rigorously practicing hitting, throwing, and catching! Yet if we had a nickel for every average player who has told us they don't Like to practice solving tactical problems as it is "too much work," "not fun," or, our favorite, "I'm okay at tactics but if I only had a good opening," we would be rich! No, memorizing chess openings is not the answer. Without genuine tactical perception you would goof up or be swindled out of your superior positions anyway.

So, what's the answer as to how to really become a good chessplayer? There's only one: you must practice solving positions with tactical solutions until you become totally comfortable with all the standard tactical concepts. Or, as our colleague, Oshon Temple (a well-known New York City chess teacher) often says, "the way to Carnegie Hall or chess mastership is the same practice, practice, practice!"

In 303 Tricky Chess Tactics, we have created a basic tactics workbook which you should go through as many times as necessary until you are able to recognize and solve all the standard tactical themes. Wc have organized the book into six chapters, reflecting, in our opinion, the frequency with which typical tactical opportunities occur. Hopefully, you will begin to develop a type of pattern recognition for sensing tactical possibilities in the many different kinds of positions. A full third of the book is devoted to forks (also often called double attacks) and pins, these clearly being the most commonly used tactics.

How to Calculate Chess Tactics, Beim Valeri - download book
We begin by identifying the essence of the matter under consideration. It will soon become apparent that, although the term 'tactics' appears on
Understanding Chess Tactics - download chess book
When my friend and former pupil Martin asked me to write a foreword to his book, I did not expect that I would learn so much from reading this
Mastering Chess Tactics - download book
Making a successful combination is one of the most enjoyable parts of a game of chess. I still have the scoresheet of my first ever combination
Chess Exam and Training Guide: Tactics: Rate Yourself and Learn How to Improve
This book is designed lo provide information on understanding tactical ideas and evaluating tactical skills, as well as various training methods.
Information
Users of Guests are not allowed to comment this publication.