How To Win In The Chess Endings - download book 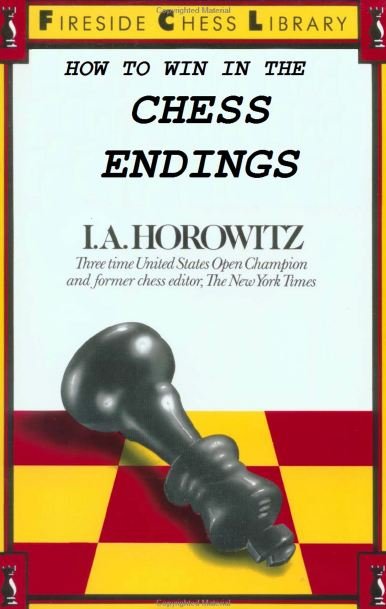 The end game, moreover, contains basic positions akin to the axioms of mathematics. To know these positions is to acquire a storehouse of fundamentals which are part and parcel of nearly every game. This knowledge is really the solid groundwork of foresight, the prime requisite of planning.

To crystallize the thought, let us assume one of the usual variety of middle-game positions. In it we find innumerable continuations, many alternate choices. To attack, to defend, to stall, to swap: these are vexing problems. If one could foresee with certainty a favorable result by one of these actions, he would know what to do. There would be no problem.

Rarely, however, is the issue so cut and dried. Almost always there is present an element of speculation. Yet it goes without saying that a favorable result brought about with a minimum of risk is the correct procedure. And here is where knowledge of the end game is the answer. Because the end game has so few units, it is often possible to calculate its consequences without fear of contradiction without risk. Thus the first course of action to be considered is that which leads to an end game.

Pawn Endings, Cvetkov Alexander - download book
Not every game lasts until the endgame; but even in the heat of the chess struggle, you have to think about it. Thus, for example, even in the
Basic Chess Endings (Algebraic Notation), Fine Reuben - download book
It is impossible to overemphasize the importance of the endgame. This is especially true in today's competitive chess with its faster time
Secrets of pawn endings
The extraordinary complexity of chess is familiar to every player. When most of the pieces are on the board, the number of legal moves is
Pandolfini's Endgame Course - download
The examples in Pandolfini's Endgame Course are arranged in three major sections. Part One, called Pieces in Action, deals with basic mates and
Information
Users of Guests are not allowed to comment this publication.