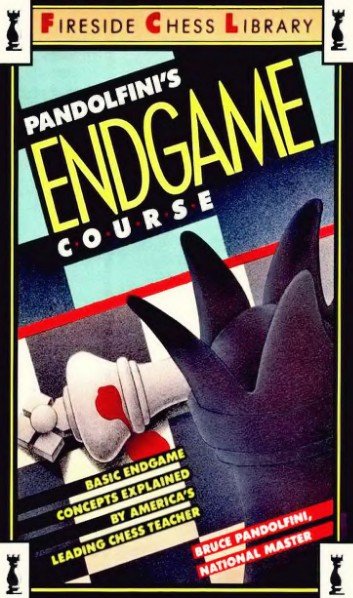 The examples in Pandolfini's Endgame Course are arranged in three major sections. Part One, called Pieces in Action, deals with basic mates and confrontations mainly between unlike pieces. In Part Two The Pawns in Action, the principles of pawn endings are illustrated, including the key concepts of opposition, square of the pawn, and critical squares. Pieces and Pawns in Action constitutes Part Three, which displays how various pieces grapple with advancing passed pawns.

Pandolfini's Endgame Course has a simple, easy-to-use format. Each page has a large, clear diagram, introduced with a directive cue (such as "White moves and wins"), and characterized by a descriptive term or phrase (such as "Cut-Off"). An explanatory passage providing the essential ideas, moves, and alternate lines of play follows the cue. The main variation appears in boldface type. Each variation concludes in mate, overwhelming advantage, stalemate, or unambiguous draw.

Within each chapter, every attempt has been made to organize the problems in a gradual progression from simple to complex, but occasionally the course must veer from this formula for instructive purposes. Though no complicated "textbook" positions have been included, the book nevertheless is concerned with the building blocks on which they are based. So, while intricate discussions of corresponding square theory have been omitted, for example, the theoretical groundwork of square theory has been laid down in the problems on triangulation.

Some endgame books contain thousands of positions but are impenetrable and therefore useless to the average chessplayer. Every one of my 239 positions can be understood, even by able beginners.

I advise reading Pandolfini's Endgame Course from start to finish. That's how I usually present the examples to my students, regardless of their level of play. But you might prefer reading specific sections first. Perhaps there's a concept you'd like to understand, or a position you need to check. Whatever your reasons for turning to my course, should it translate to more victories in the endgame, and more fun in the end.

The Survival Guide to Rook Endings 2007
The first chapter deals with the essential theory of basic rook endings, including rook vs pawn(s) and rook and pawn(s) vs rook. I've tried to
Fundamental Chess Endings - download free
Fundamental Chess Endings is primarily concerned as a textbook and is divided into 12 chapters with exercises. We start with the basic mates and
Pawn Endings, Cvetkov Alexander - download book
Not every game lasts until the endgame; but even in the heat of the chess struggle, you have to think about it. Thus, for example, even in the
Endgame Virtuoso, Smyslov - download book
Many chess games conclude in the endgame, and from ancient times this stage of the game has been analysed. There are monographs and reference
Information
Users of Guests are not allowed to comment this publication.