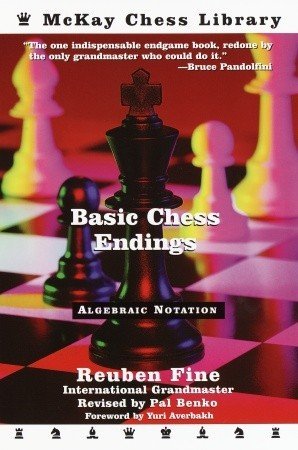 It is impossible to overemphasize the importance of the endgame. This is especially true in today's competitive chess with its faster time controls. A player who is not well equipped with basic endgame knowledge is liable to lose the fruit of even a well-played game.

Grandmaster Reuben Fine's classic book on the endgame was my compass when I started to play chess and continued to guide me after I became a master. Indeed, entire generations of chess players grew up on this great book. No wonder it has been called the bible of the endgame. This very practical and useful one-volume textbook, with its great many examples, explains the mysteries of the final phase of the game in plain language that can be read and enjoyed with profit by amateurs and masters alike.

I was honored to be asked to revise Fine's tremendous work, which had been first published in 1941 and had never been revised. For the most part I have left this great body of knowledge untouched, except to correct errors (unavoidable in such an enormous work) and to delete redundant and outdated material. I have brought the book up to date as regards endgame theory and added new examples. Fortunately, basic endgame theory, unlike opening theory, has not changed much in the last half century, except in certain technical areas.

Converting the original chess notation from descriptive to algebraic, now the universally accepted system, has enabled a much clearer and more compact presentation of the text while preserving its authenticity. The conversion was professionally accomplished by Laszlo Lovass of Hungary
Thanks to Burt Hochberg, who initiated and supervised this project and edited the manuscript.

I hope all new readers will learn from and enjoy this book as much as I have.

Practical Rook Endings, Viktor Korchnoi - download book
It is said that I play the endgame very well, and that it is due to my outstanding technique thai I have managed to win so many tournaments and
Analysing the Endgame, Speelman - download book
Basic Chess Endings was first published in 1941. It is a magnificent work, especially considering the paucity of material which preceded it. But
100 Endgames You Must Know, 2008 - free download
In my first years in the world of chess, I used to read a lot about the importance of a good knowledge of endgames and the futility of studying
Practical Endgame Play Beyond the Basics - download book
Very interesting book, which revealed all sorts of ways to reach the end and wins in these endings. First of all, this book will be useful for
Information
Users of Guests are not allowed to comment this publication.