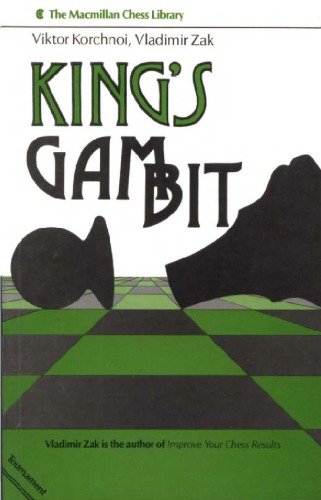 The King's Gambit is one of the most ancient openings and an opening which leads to a sharp struggle from the very first moves.

Whereas in the Ruy Lopez White lays siege to Black's-pawn on e5 slowly, over a large number of moves, in the King's Gambit While begins to storm Black's central pawn right away with his second move, without regard for the resultant weaknesses or for the forced material sacrifices, which arc sometimes quite considerable.

The King's Gambit was especially popular in the last century. The outstanding masters, who used the King's Gambit in their most important encounters, set themselves the basic aim of obtaining an attack - gain si the enemy king and, in the first place, an attack on 17 And to this end, caring little about the means they used, they would clear away all the obstacles on the f-file.

These limited strategic aims could not apparently satisfy the tables of numerous talented players who made their appearance at the end of the nineteenth and at the beginning of the twentieth century, and so the King's Gambit became a rare guest at international tournaments.

Nowadays, as a result of the efforts of many theoreticians, including the grandmasters Keres, Bronstein and in particular ex-World Champion Boris Spassky, the King's Gambit has begun to be resurrected, but this time on a completely different basis.

Without discarding the idea of building up a rapid attack against the enemy king, but also without showing any reluctance to transpose into the better endgame, they have updated a whole series of variations and transformed the King's Gambit into a totally modem opening, The games played by these grandmasters and by a number of other players in recent years show that, because of the poor knowledge of the theory of the King's Gambit, the probability of White's obtaining an opening advantage is very great.

In the present book the authors have tried to draw together the material available at present, so that lovers of the King's Gambit may have the opportunity to study all the most fashionable systems of this interesting opening.

It remains to be said that many old variations and pieces of analysis have /been improved upon by the authors, and consequently the assessment of them is in a number of cases different from the usual.

The Fabulous Budapest Gambit: Much More Than Just a Sharp - download book
What does White play against the Budapest Gambit?    The key move in the modern BG is White's 4th, when he determines his opening
Attacking with 1 d4, Dunnington - free download book
It is significant that a definition of 'attack' is as follows: 'to take the initiative in a game'. I had this in mind when selecting the opening
Winning with 1 f4 - download book
For most of the 20th century the Dutch Defense was considered a form of "giving positional odds." It had a terrible reputation. But in the late
Information
Users of Guests are not allowed to comment this publication.