The Fabulous Budapest Gambit: Much More Than Just a Sharp - download book 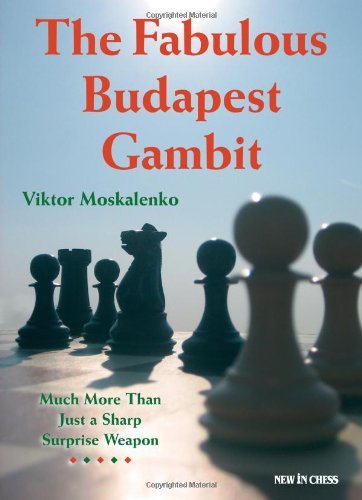 What does White play against the Budapest Gambit?
The key move in the modern BG is White's 4th, when he determines his opening strategy. The most popular moves are the various defences of the extra pawn on e5: with the knight (4.Nf3) or the bishop (4.Bf4), and then there are moves like 4.e2-e4 and 4.e2-e3.

A key problem in the BG is that White gains most of his points with simple, well-known moves. Therefore Black looks for risky lines and may look for gambit moves like ...d7-d6 or ...f7-f6 in many lines.

I would be interested to know if with the passage of time, certain players have gained or lost more points with the BG. White has won the same percentage of games at all times, the amount of draws has increased slightly through the years, whereas the amount of black victories has decreased slightly.

In all periods, the white player was on average stronger than the black player, so they would probably have won anyway, with or without the BG. The Budapest Gambit is played more and more by weak players, which does not help to advance or develop the theory.

Here the key question is: why do strong players hardly ever play the BG? Because it is a weak defence, or because they do not approve of it theoretically? A possible answer is that its theory is insufficiently developed and it is somewhat easier to play with the white pieces. There is much more risk for the black player, and several historic defeats have given the BG a bad reputation.

So maybe for these reasons, strong players prefer to devote their attention to more universal opening systems.

The King's Gambit - download book
The King's Gambit is one of the most ancient openings and an opening which leads to a sharp struggle from the very first moves.
The Gambit Guide to the Modern Benoni - download book
The project before you, like so many investigations in the chess world, has proven full of surprises. As often happens with authors, I have been
Winning with 1 f4 - download book
For most of the 20th century the Dutch Defense was considered a form of "giving positional odds." It had a terrible reputation. But in the late
Information
Users of Guests are not allowed to comment this publication.