The Gambit Guide to the Modern Benoni - download book 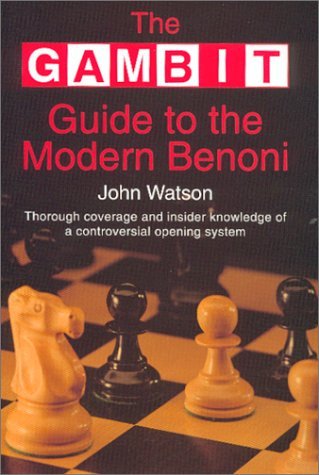 The project before you, like so many investigations in the chess world, has proven full of surprises. As often happens with authors, I have been struck by how theory, incredibly deep in some lines, is superficial or just wrong in many areas. We tend to assume that everything is more or less worked out in established openings, but that is perhaps a confusion between the great mass of games, which often don't signify much, and the best moves. It turns out that much of the Modern Benoni is still unexplored territory.

This is a repertoire book for Black, which means that instead of trying to cover the opening as a whole, Black is provided a set of suggested lines. The drawback to such a book is its lack of comprehensiveness; its advantages are in attention to detail and in the discipline it imposes upon the author. That is, the author is responsible for specific lines of play, and to the extent that it is practical, should not ignore any reasonable move by White, whether or not it has been played or discussed.

My method has been to offer the reader a first, second and occasionally third system against the most critical and popular variations. Thus if one line fails due to a theoretical development, or if it doesn't appeal to you, there's another option or two to look into. The majority of older or lesser variations are dealt with in the same fashion, although there are some exceptions. In most cases, the first suggested repertoire system is a more established strategy, whereas the second repertoire system tends (with very important exceptions) to be somewhat lesser known, less theoretical, and in many cases, more fun. I have also analysed or simply mentioned further options for Black in the notes to these proposed systems.

The Benoni was my first defence, inspired by the play of the great Mikhail Tal. Other world champions such as Spassky and Fischer used the Benoni only sporadically, but the early Kasparov had it as his main weapon. The best-known contemporary Benoni players and theoreticians are probably Psakhis, Kapengut, Nunn, Suba and Topalov. A selective list of other players who have strongly contributed to its theory would include Suetin, Velimirovic, de Firmian, D.Gurevich, Sax, Ljubojevic, Matulovic, Pigusov, Lobron, Magerramov, Marin, Shabalov, Kindermann, Y.Grunfeld, A.Schneider, Yudasin, Spraggett, Wahls, Wedberg and Emms. My apologies to the other deserving names I have left off this list.

Starting Out: Benoni Systems - free download book
Welcome to this book in which I will try to present the wonders of the Modern Benoni to you. This is a Starting Out book and, as such, is not a
An Explosive Chess Opening Repertoire for Black - download book
Our main objective is to give Black a complete repertoire with the opening move 1...d6. The other aim is to provide a more detailed theoretical
The Fabulous Budapest Gambit: Much More Than Just a Sharp - download book
What does White play against the Budapest Gambit?    The key move in the modern BG is White's 4th, when he determines his opening
Information
Users of Guests are not allowed to comment this publication.