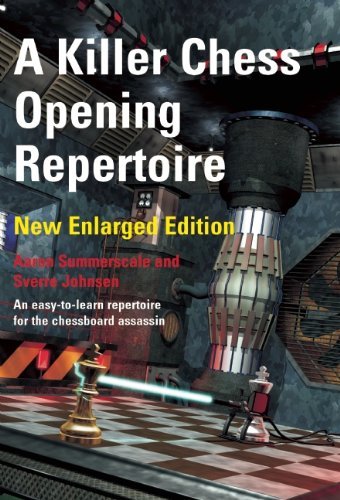 This book is aimed primarily at club-level players with a playing strength of up to about 2200 Elo (or 200 ECF). When I was a young player at school I was always looking out for new repertoire books. I wanted something which would give me all I needed to know about the opening, without being too time-consuming, as I had plenty of other things to do with my time. I guess you could say I was not a very serious chess student and in fact I delighted in getting my opponents on unfamiliar ground, when my natural ability would get a chance to shine through.

The problem I found with the repertoire books of the time was they attempted to cover too much material. Main-line variations would be covered in just a few pages, so justice was never done to the lines recommended. In the end I would have to consult a more specialized work on one of the suggested variations to find out the true story behind it and waste valuable time in the process. Meanwhile, I would suffer a few painful reverses, as my lack of understanding was exposed on the board.

I have chosen systems that I believe will have the greatest psychological impact. There is a school of thought that says "you should play the man, not the board". If you accept this, then you can learn a lot about an opponent from their choice of opening variation. For example. King's Indian players tend to be well booked-up. They often accept structural weaknesses in return for attacking chances. The Barry Attack is likely to annoy King's Indian players, who will be thrown onto their own resources from an early stage in unfamiliar positions where the usual plans just don't work.

With reference to the material itself, wherever possible, I have tried to place the emphasis on understanding what is occurring through explanation, rather than by weighty variations. This is because, for the most part, the variations I recommend are flexible and the move-orders are often quite interchangeable. In such situations, understanding what you are trying to achieve is of far greater importance than remembering specific moves.

I have included a number of non-grandmaster games in the material. This is because I feel it will be useful for the reader to have a number of examples where Black defended less than perfectly, just as might happen in your average weekend tournament or local club match. These variations, although not objectively critical, should help to build your confidence in the recommended openings and aid you in understanding the various tactical motifs. Having confidence in your opening repertoire is in many ways as important as memorizing theory, because if you hit a snag, believing in your pet line will give you the self-assurance to solve any problems your opponent might set for you.

An Opening Repertoire for Black - download book
Theory has become too complicated, the volumes too big. It has become very difficult for a club player to choose what is good in such a labyrinth
Play the French, Watson John - download
With the recent explosion in chess theory, a complete volume covering all variations of the French Defence would require some 1500 pages at least.
Meeting 1. d4 - download
This book was jointly written by Jacob Aagaard and Esben Lund over the summer and fall of 2001. During the first weeks of the cooperation we were
Beating The Anti-King's Indians - download book
'What on earth are the Anti-King's Indians?' you must be asking yourselves. Well, I have taken the liberty of defining them as all variations of
Information
Users of Guests are not allowed to comment this publication.