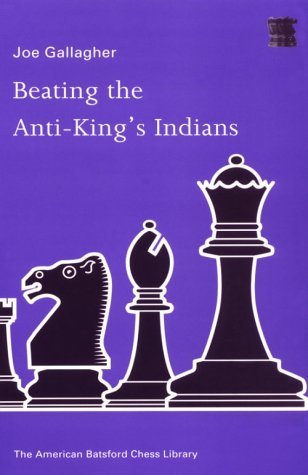 'What on earth are the Anti-King's Indians?' you must be asking yourselves. Well, I have taken the liberty of defining them as all variations of the King's Indian except for the Classical, the Samisch and the Fianchetto; plus all the lines where White doesn't play an early c4 (Trompowsky, Torre Attack, etc.).

Much literature has been devoted to the King's Indian in recent years, but a large percentage of it has concentrated on the 'main lines'. For example, Nunn and Burgess have produced a mammoth 640-page work (in two volumes) uniquely on the Classical Variation, while I myself chipped in with a 240-page effort on the Samisch and I believe that Batsford have a project on the Fianchetto variations in the pipeline. Even books dealing with the whole King's Indian tend to treat our variations as an afterthought. For example, The Complete King's Indian by Keene and Jacobs (Batsford 1992), devotes a mere 13 pages (out of 272) to the variations covered in this book.

The neglect of these 'Anti-King's Indians1 seemed a little unfair to me. Taking my own games as an example I found that about 50% of my King's Indian's over the last five years have been Classicals, Samisches or Fianchettoes while the other 50% have been made up from the King's Indian lines in this book. And, what's more, these figures do not take into account the 25% or so of my games in which White played 1 d4 and didn't follow up with c4. The idea for this book was beginning to take shape.

Of course the material was much too vast to consider an extensive reference book, so the by now familiar concept of a repertoire book was the answer. Against each of the variations in this book I have selected one main defence for Black but you will also find plenty of alternatives in the notes in case the main line ever runs into trouble.

Fighting the Anti-King's Indians: How To Handle White'S Tricky Ways Of Avoiding The Main Lines
The King's Indian: A Complete Black Repertoire, Bologan - download book
An excerpt from the first chapter    We will begin our survey of the King's Indian Defence with the so-called "sidelines". Their name
Bronstein on the King's Indian - free download
On the occasion of David Bronstein's 75th birthday in February 1999, Garry Kasparov published a tribute on his web site in which he described him
The King's Gambit - download book
The King's Gambit is one of the most ancient openings and an opening which leads to a sharp struggle from the very first moves.
Information
Users of Guests are not allowed to comment this publication.