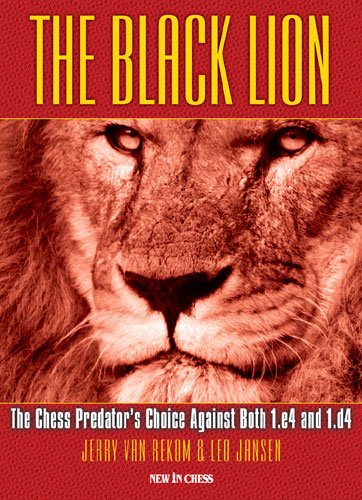 Opening books about 'The Lion', as our opening has come to be known, have been a success ever since their first appearance in 1997. And so it is high time for a second, fully revised and updated edition for the devotee, the Internet player and the Lion fan.

In this revised edition of The Lion, the black weapon (2001) the authors continue on the path taken, but we have shuffled the cards a little. This edition aims to reflect modern times better. New material has been included, analyses have been improved, but the presentation has also been altered.

In February 1997, the first Dutch edition of The Lion, the black weapon was published. It was soon followed by a second edition (1998) and in November 2000, the third edition saw the light of day, followed by an English translation in August 2001.

When the third Dutch edition sold out as well, the demand for a new edition remained enormous. The time came for a fourth edition, as well as a second English edition, of the 'Black' version.

This second English edition is now lying before you. We have baptized it The Black Lion, in order to avoid confusion with the 'White' version.
What's it all about? The Black Lion is characterized by the following starting position:

The most important features and side-variations that spring from this starting position will be discussed in this work. The most important characteristics, combinations and tricks will be presented to the reader.

This means that in this fourth edition, the 'genuine' Philidor opening will not be discussed. In earlier editions, this opening, where kingside castling for both sides played the leading part, was discussed in the chapter 'The Lion's Head'. For a discussion of the Philidor we refer the reader to works that have been written specifically on this subject. Recent examples are The Philidor Files by the French grandmaster Christi-an Bauer and Geheim-Waffe Philidor by the German IM Christian Seele. We will restrict ourselves to genuine Lion variations about which next to nothing is to be found elsewhere. (Of course, The Lion's Head can still be studied in the earlier editions of The Lion, the black weapon.)

Mainly by using the inexhaustible chess oeuvre of this system's pre-eminent champion, Leo Jansen, the authors have been able to turn The Black Lion into a playable chess opening.

The name of The Lion results from the following thoughts of our chess friend Rob Klop, who, sadly, passed away much too soon:


Of course no book on chess theory can claim to be exhaustive, but the authors of The Black Lion, a Predator's Choice against Both l.e4 and l.d4 are confident that this fourth edition will help many (club) players in their quest for a surprising opening choice, not giving prevalence to learning variations by heart, but to the train of thought behind the system.

The Black Lion has also turned out to be an excellent weapon for playing chess on the Internet. The system is often a time-winner for its user, since the black player can follow fixed patterns, whereas White often has to search for the right way to conduct the battle. Thus, we can see that The Black Lion produces some surprising results on the world wide web. On the other hand, grandmasters like Alexander Morozevich try out new ideas for White on the Internet to combat The Black Lion, adding yet another dimension to our game.

Modern Chess Openings, 14th Edition (Mckay Chess Library) - download book
A Killer Chess Opening Repertoire (New Enlarged Edition) - download
This book is aimed primarily at club-level players with a playing strength of up to about 2200 Elo (or 200 ECF). When I was a young player at
Sacrifices in the Sicilian (2nd edition) - download book
In a recent survey of the twice-yearly Yugoslav publication Informator, I discovered that one quarter of their published games over a five year
The Ideas Behind the Chess Openings, Fine Reuben - download book
It is a pleasure to present this Third Edition of The Ideas Behind the Chess Openings.    For this edition, I have re-examined all the
Information
Users of Guests are not allowed to comment this publication.