The Ideas Behind the Chess Openings, Fine Reuben - download book 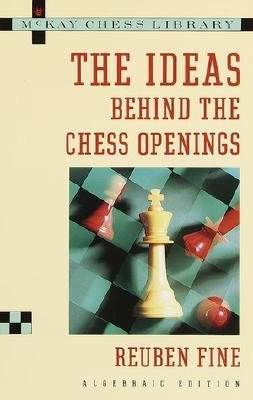 It is a pleasure to present this Third Edition of The Ideas Behind the Chess Openings.

For this edition, I have re-examined all the variations in the book, as well as the variations in the Encyclopaedia of Chess Openings and other standard compendia. Numerous new variations have appeared, but the ideas themselves have remained remarkably constant. In addition I have taken the opportunity to convert the text to the now standard algebraic notation, a major improvement for the modern reader.

The major difference between master play now and in the 1930s is found in the Indian Defences and in the Sicilian Defence. In the Indian Defences the main novelty is the active counterattack maintained by Black, ranging from some novelties such as the Benko Counter Gambit (probably unsound) to the variations of the Benoni Counter Gambit, which has been completely rehabilitated and presents a formidable weapon for Black.

The situation can be interpreted to mean that chess theory reached its full maturity in the period from 1930 to 1945, and is unlikely to change any more. The broad historical development of chess strategy may now be sketched as follows. Prior to Steinitz chess strategy was formulated, if at all, only in terms of wild gambit attacks which depended mainly on tactical thrusts. Morphy was a master of the modern principles in his games, but he did not formulate anything in writing.

The great organizer of chess was Steinitz, who loved to place the emphasis on keeping and maintaining the centre. However, Steinitz and even more his follower Tarrasch carried the principle to extremes. A reaction set in with the hypermoderns(in the 1920s), who stressed control of the centre rather than actual manipulation (for example in Alekhine's Defence). As a result, the game became much more fluid. Tarrasch, the last of the old school, "pooh-poohed" the tendency, but was quickly over-ruled by the course of history.

The period of 1930 to 1945 was marked by a cautious blending of the roles of controlled counterattack and occupation. It was generally assumed at that time that actual occupation was essential and such variations as 1 d4 g6 were considered bizarre and unsound.

Whatever appears in the future, this book represents a distillation of 100 years of chess history. Any reader who masters the underlying ideas will be able to improve his chess skill immeasurably.

Sacrifices in the Sicilian (2nd edition) - download book
In a recent survey of the twice-yearly Yugoslav publication Informator, I discovered that one quarter of their published games over a five year
Play the French, Watson John - download
With the recent explosion in chess theory, a complete volume covering all variations of the French Defence would require some 1500 pages at least.
Modern Chess Openings, 14th Edition (Mckay Chess Library) - download book
Attacking with 1.e4, Emms John, 2001 - free download book
This is a book aimed for those who want a opening repertoire based on 1 e4. Moreover, this is an openings book for those who have neither the time
Information
Users of Guests are not allowed to comment this publication.