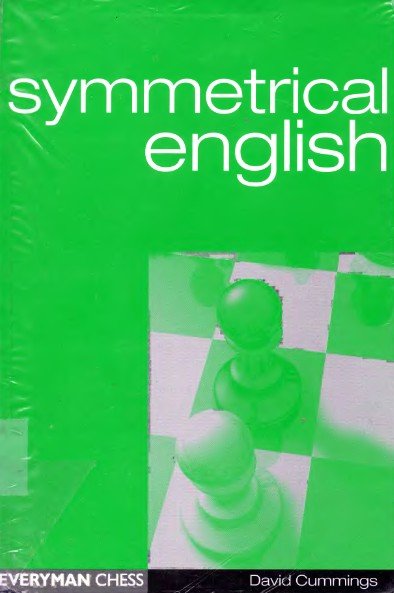 The Symmetrical English (1. c4 c5) is an important part of chess theory, and is played at every level of the game from World Championship to club chess. Soon after starting work on this book, I began to appreciate the wide spread of material categorised under 1. c4 c5. While 1. c4 and 1. Nf3 are less popular than 1. e4 and 1. d4, any tournament player who neglects to prepare a response to them as Black, does so at his peril. I have tried to be as objective as possible and cover both Black's and White's ideas and interests on an equal footing.

I had the following goals in mind for this book:


I believe the "complete games" approach is well suited to this subject matter. There seems little point in presenting the latest 1 c4 c5 theory in encyclopaedic fashion without explaining some thematic examples of, for example, how and when to go for a ...d7-d5 break in the Hedgehog, or what the key plans are in a 'quiet' symmetrical line. At the same time, it is naive, especially the higher you go, to expect to avoid concrete knowledge in any modern opening. Many lines are as sharp as main-line 1. e4 or 1. d4 openings.

Some chapters have a longer introduction, covering typical ideas, than others. This is no accident. Some lines have positional ideas or common tactics that crop up in a large number of games and across several sub-variations, while others are less systematic. While there are some general principles that can be abstracted, almost every line has its own character and concrete nature.

Sacrifices in the Sicilian (2nd edition) - download book
In a recent survey of the twice-yearly Yugoslav publication Informator, I discovered that one quarter of their published games over a five year
An Explosive Chess Opening Repertoire for Black - download book
Our main objective is to give Black a complete repertoire with the opening move 1...d6. The other aim is to provide a more detailed theoretical
The Black Lion: The Chess Predator's - download book
Opening books about 'The Lion', as our opening has come to be known, have been a success ever since their first appearance in 1997. And so it is
A Killer Chess Opening Repertoire (New Enlarged Edition) - download
This book is aimed primarily at club-level players with a playing strength of up to about 2200 Elo (or 200 ECF). When I was a young player at
Information
Users of Guests are not allowed to comment this publication.