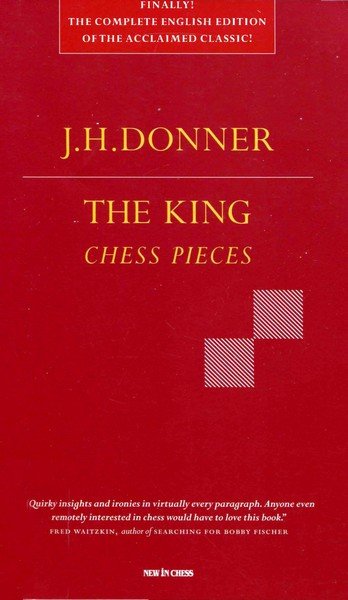 From 1955 onwards, Dormer regularly contributed a chess column to the Saturday edition of the daily De Tijd, under the remarkably pessimistic headline 'Those Who Play at Chess Must Look out for Mate'. It was for this same newspaper that he first began reporting on tournaments and the matches for the world championship. Donner soon developed a strictly personal view on how such chess reporting should be handled: 'The man who takes up the pen to report on a sport event always does so in deep inner uncertainty, because he is by no means convinced himself of the essential importance of such an event and is constantly struggling against the overwhelming sense of his own absurdity. This applies to anyone writing about sports, whether it is football, draughts or chess. It is up to the sports writer to make the event important, to attract and guide the public's attention and to present the simple facts in a colourful way.' And then Donner says approvingly: 'Mr Straat used to invoke Homer as the patron saint of all sports journalists: he turned the crude slaughter between two gangs of hooligans fora common whore into an immortal epic'.

Donner also pointed out that chess reporting was different from other sports journalism in one important aspect. Football reporters have their place on the stand; they cannot kick a ball themselves or dive to the post, as a rule. But this is a drawback that does not apply to chess journalists in general and least of all to Donner: at many tournaments, he was both a participant and a reporter.

This participatory reporting had its advantages and its disadvantages. It is the main reason on the one hand that Donner's pieces arc characterized by such refreshing subjectivity, but on the other there was always a danger that the readers, who expected regular reporting from their newspaper, were sorely disappointed. When a tournament did not go too well for Donner, it would happen that the reporting simply stopped. After a few days' silence, Donner would sometimes frankly admit: 'A few readers may have noticed that reporting in these columns came to an abrupt halt late last week, to be replaced by bare results. Whoever took the trouble of studying these results may have had his suspicions. And indeed: both against Israel's Kagan and against Austria's Holzl I suffered weighty defeats at the third board.'

Although Donner always felt strongly about subjectivity ('Donner's enormous strength of mind with regard to the facts') and left no doubt that he thought modesty was a bad quality, he never was a pompous braggart. After he scored the greatest triumph of his career, winning the 1963 Hoogoven chess tournament ahead of Bronstein and several other strong grandmasters, he wrote an almost diffident concluding article in Elseviers Weekblad: 'Have I become stronger? I don't feel any different. Even such a personal achievement as winning a chess tournament must be regarded as an event outside oneself. The wind blows whichever way it wants.' What followed was a long piece, dealing for 90 per cent with Donner's admiration for Bronstein-illustrated by one of the Russian's games. However historic it may be, it was a boring piece, which is why we left it out.

And how did he come to win the 1967 tournament at Venice, ahead of the world champion, Petrosian, among others? 'Winning such a tournament, gentlemen, is pretty straightforward. Chess is, and will always be a game of chance.' It was one of Donner's main themes: no wonder that the three famous narrative analyses in this book are all of games (against Velimirovic, Quinteros and Ghitescu) that he won undeservedly. 'Winning a game due to mere chance gives much greater joy and satisfaction than winning with correct play.'

How Fischer Plays Chess - download book
During the first seven months of 1955 Fischer played some thirty tournament games. Possibly his failure in the Junior Championship was a big blow
Rocking the Ramparts: A Guide to Attacking Chess - download book
How to improve your combinative skill    Unquestionably, tactical skill is an essential ingredient for successful attacking play. There is no easy
Mastering Positional Chess - download book
Nowadays, many players hugely underestimate the importance of positional play. Certain writers promise the reader gigantic rating gains if the
New In Chess: The First 25 Years - free download
It is probably just as well that I never married, as remembering anniversaries has never been my forte. Thus, it came as a complete surprise when
Information
Users of Guests are not allowed to comment this publication.