How to Win at Chess - 10 Golden Rules to Follow 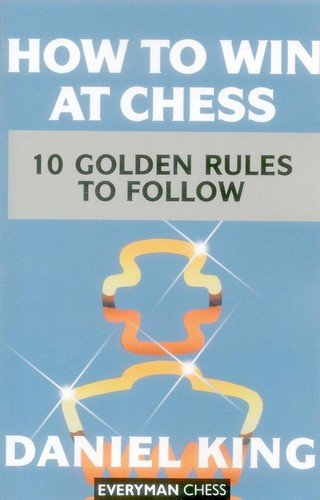 If you have just learned the moves and would like some guidance as to what you should be aiming for, then this is the book for you. Alternatively, if you have already been playing for some time, but would like to consolidate your knowledge, then you are also at the right place.

I have sought to pin down ten of the most important principles to bear in mind during the game: three for the opening; four for the middlegame; and three for the endgame.

At first, especially on the page, these rules might appear abstract, but the more you play, the more you will appreciate their relevance. For the top players in the world who have a wealth of experience, these principles now come as second nature, and it is this that they rely upon rather than any supposed ability to memorise strings of long variations. I am not pretending that simply by reading this book you will join the world's elite - that only comes through years of practice - but it will give you a solid foundation from which you can be confident of improving your game.

I would recommend that you go through each rule carefully rather than attempt to polish off the whole book in an evening; that way they are more likely to stick. I don't know about you, but I find that trying to keep ten things in mind at the same time is a chancy business.

Note that I write above that these are rules to 'bear in mind'. I am not advocating that you follow them slavishly: if you get into a situation where the rule says 'get castled', but you see a way to capture your opponent's queen, then don't hesitate, whip it off!

If you are unfamiliar with chess notation, then I would strongly recommend that you take a look at the next section 'Understanding chess notation' before moving on to the bulk of the book. Don't be put off by this, it is very simple; and there will be plenty of diagrams throughout the book to help you along.

101 Chess Opening Surprises - free download
Surprise is an extremely powerful weapon in chess and especially in the opening. A player who is surprised in the opening will often lose heart
Beating The Open Games - download book
The opening moves 1.e4 e5 are as old as the game of chess itself but they have lost none of their relevance in the era of the information
Inside the Chess Mind - How Players of All Levels Think About the Game
There are two kinds of chess books. There are the books the authors for some reason just needed to write; and then there are the books the
Mastering the Chess Openings, 2 volume, 2007 - free download
This book assumes a basic level of playing competence. Nevertheless, those who know the rules, have played a bit, and are willing to put some
Information
Users of Guests are not allowed to comment this publication.