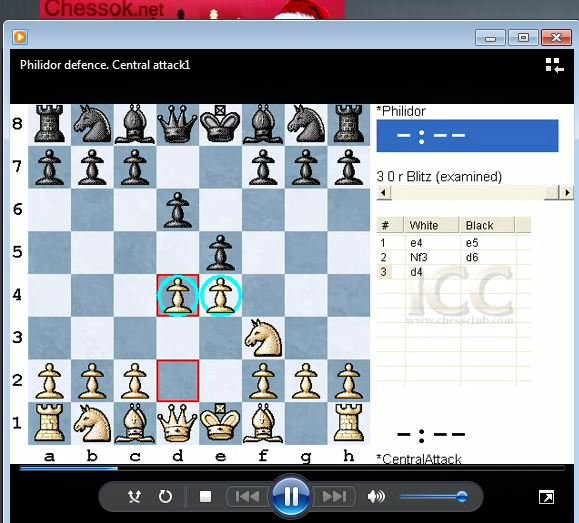 Philidor defence is the very old variation used at Steinitz times; it was named in the honor of the excellent player Francois-Andre Danicon Philidor. He repeatedly used this defence playing against the first world champion, and gained success in some of the games. Nowadays this defence is not used that much as it gives the initiative to the White immediately and the center is conceded. Still this video lesson is worth watching to know how our predecessors played and how chess developed. This video is divided in three parts. In the present lection the main system of the White is reviewed - the central attack giving the considerable advantage.

Chigorin defence - download video
Chigorin defence appears after the following moves order - 1.d4 d5 2.c4 Nc6. At the third move White has to make up the plan of the game and
Two Knight's Defence. Traxler's counter attack - download video
Two Knight's Defence. Traxler's counter attack. This is the mega dangerous attack developed by the talented master Traxler. This attack contains
Four pawns attack in Alekhine's defence - download video
Four pawns attack in Alekhine's defence is the most dangerous. Black comes to the very stuffy position which is still acceptable for the defensive
Old indian attack - download video
In this video lesson the variations of the Old Indian formations for White are addressed. The lessons are in English. Straight after some preface
Information
Users of Guests are not allowed to comment this publication.