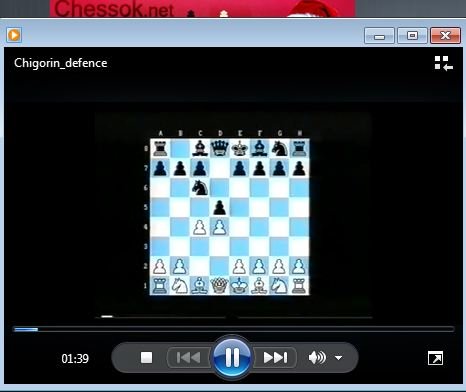 Chigorin defence appears after the following moves order - 1.d4 d5 2.c4 Nc6. At the third move White has to make up the plan of the game and choose one of the variances. The system is not new however it is time-tested. Mikhail Chigorin himself scored a success playing against unsophisticated players.

Sicilian defence. Najdorf Variant - download video
Sicilian defence. Najdorf Variant - 1.e4 c5 2.Nf3 d6 3.d4 cd 4.N:d4 Nf6 5.Nc3 a6. Frankly speaking, this variation is very difficult to study and
Two Knight's Defence. Chigorin's gambit - download video
Two Knight's Defence. Chigorin's gambit - 1.e4 e5 2.Nf3 Nc6 3.Bc4 Nf6 4.Ng5 d5 5.ed Na5. This is most widely spread variation in the two knight's
Traps from the Grand Master
Nigel Davis is one of the best Grand Masters of today. He will tell us about the traps which the every player can get into. The traps are reviewed
Philidor defence. Central attack - download video
Information
Users of Guests are not allowed to comment this publication.