Pump Up Your Rating: Unlock Your Chess Potential - download book 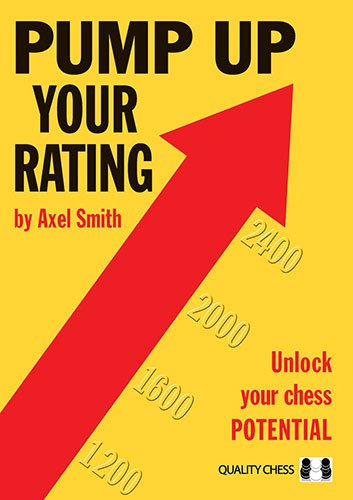 This book is mainly for the ambitious player, but don't let the word ambition frighten you! It only means that you really want to improve.

Fulfilling these two aims obviously can't be done without showing a lot of instructive games. Since our game is universal, players of different strength can learn from the same examples. I have strived to explain in a way that makes the annotations understandable, but still not too simple.

In 2006, when I switched from being a human to being a chess player, I worked through 26 chess books from cover to cover. But somehow I arrived at the conclusion that improving at chess requires more active learning than what is possible by simply reading. My approach became to look for moves rather than generalizing them into verbal rules, and it worked well.

It would not be the best selling point to claim that reading books is unnecessary, but luckily, I don't claim that. Firstly, this book contains a fair share of exercises, forcing your brain to work with the material. Secondly, I think there are some rules of thumb and thinking techniques that you need to learn before working by yourself. I refer to sayings like "Put your rook on the same file as the opponent's queen", and methods like candidate moves, blunder checks and critical positions.

The first question is whether rules of thumb and thinking techniques are useful at all. I found an extensive debate about this while I was finishing this book and got myself up to date on the latest chess literature of the last few years.

Willy Hendriks takes the most extreme position in Move First, Think Later (2012). He argues that there's nothing but concrete moves; Alexander Kotov's mechanical variation trees, from Think Like a Grandmaster (1971), and other thinking techniques are oversimplifying and of no use at the board.
Since the debate covers a fundamental view of our game, I think I have to make my position clear. Hendriks' book is a good starting point, since it's fantastically well written.

Symmetrical English - download chess book
The Symmetrical English (1. c4 c5) is an important part of chess theory, and is played at every level of the game from World Championship to club
Practical Chess Defence, 2006 - download book
Before we have a look at the "chess" methods of defence, it will be useful to discuss the various thinking methods that can be helpful when
Understanding Chess Tactics - download chess book
When my friend and former pupil Martin asked me to write a foreword to his book, I did not expect that I would learn so much from reading this
How To Play Chess Endgames - download book
Before we plunge into the wonderful world of endgame strategy, we should like to give you some hints on how to use this book.
Information
Users of Guests are not allowed to comment this publication.