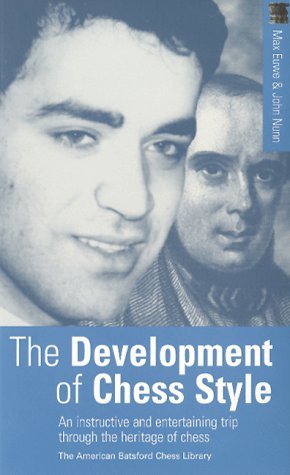 The first stage of growth is the most difficult and lasts the longest: so it was in the story of chess.

The primitive chessplayer lived, so to speak, from hand to mouth. He made his move and hoped for the best. It was a matter of excursions with the pieces, punctuated by pleasant little episodes such as winning a piece or giving check especially giving check, which had a rare fascination for the early players. But systematic play was virtually non-existent; what happened on the board was largely a matter of chance.

Progress first manifested itself in the extent to which players were able to profit from more or less fortuitous opportunities; and in this respect the most typical figure from the early days of chess was Greco.

The following two games are taken from the manuscript written by Greco about 1025. The author evidently possessed an incisive power of combination and ability to see clearly into complicated situations. His manuscript consists largely of a collection of pretty tactical devices to which, however, the best defences were often not taken into consideration. They show one player going all out for mate while the other plays to win as much material as possible. These are chess fairy-tales on the age-old theme of the conflict between riches and honour; and very attractive fairy-tales they are, albeit somewhat primitive to present-day sensibilities.

The Calabrese, Gioachino Greco, was born about 1600 and died not later than 1634. He was the first great genius in the story of modern chess. His life was short, but the examples which he worked out set the pattern for a hundred years; some live on to the present day as an integral part of chess theory.

The Basis of Combination in Chess - download book
To the chessplayer there is something glamorous, almost mystic, in the very word "combination"; it conveys to him a different world, a world
Rocking the Ramparts: A Guide to Attacking Chess - download book
How to improve your combinative skill    Unquestionably, tactical skill is an essential ingredient for successful attacking play. There is no easy
How to Calculate Chess Tactics, Beim Valeri - download book
We begin by identifying the essence of the matter under consideration. It will soon become apparent that, although the term 'tactics' appears on
Mastering Positional Chess - download book
Nowadays, many players hugely underestimate the importance of positional play. Certain writers promise the reader gigantic rating gains if the
Information
Users of Guests are not allowed to comment this publication.