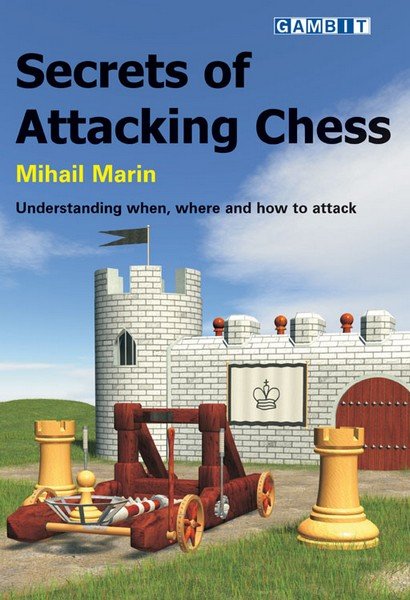 This is only partly a logical continuation of my previous book for Gambit, Secrets of Chess Defence.

True, after investigating several aspects of the chess fight from the defender's point of view, the desire to have a look from the opposite side was natural. And yet, the method of investigation chosen is quite different from the previous case; in spite of the apparent similitude (or rather symmetry) of the titles, the thematic universe is of quite a different nature.

In Secrets of Chess Defence I focused on a series of concrete methods of dealing with inferior positions. For the new book, I have chosen a much broader approach. In the first place, I have aimed to investigate the smallest details that can create the premises for a successful attack as well as the way the objective evaluation of a certain position persists along a sequence of moves in the case of optimal play from both sides and in spite of the successive changes of character of the fight. Although my previous work also contained such discussions about chess logic, the main difference is that here this will be a central theme. One could say that Secrets of Chess Logic would also be a suitable title for this book. However, all the games included here involve complex attacking operations, so the title chosen is the most appropriate one.

Chess is much more complicated than what can be comprised in the notion of common sense. Therefore, a dissertation about the logical character of our royal game needs a huge amount of analytical work in order to be convincing. Keeping this in mind before starting the concrete work on this book, I had to decide which method of work would be most appropriate.

One natural solution was to use the computer's help. However, as an active player I had my doubts about it. Relying too much on computerized assistance can lead to a decrease of one's practical strength, causing the human brain a pathologic laziness. There are also other negative aspects of such an approach, which I have discussed in the final chapter of the book.

I soon reached the following paradox: I certainly needed to have a computer in my 'working team' but wanted to spend most of my time analysing on my good old three-dimensional wooden board. Finally, I adopted a combined solution.

I asked my friend IM Valentin Stoica, who is a specialist in computer-assisted analysis, to help me. I suggested to him the following plan: we would analyse together virtually all the material that was going to be published, but I was going to concentrate on the chessboard only, while he would split his attention between the chessboard and the screen. However, the whole conception of the book and the literary part remained wholly my job. Being a devoted researcher, he gladly embarked on this ambitious project.

The reader will notice that the book contains a relatively small number of games (slightly less than 30). Can this be enough to elucidate at least part of such a major subject? I am firmly convinced that it can. Each of these games is enormously complicated and contains a whole universe of situations, both of objective and psychological natures. To the human mind, chess has virtually unlimited complexity, but Vali and I sought to analyse these games until we felt we had reached the very essence of the key issues. It would definitely have been easier to include 150 or 200 lightly annotated games, but I very much doubt that I could have drawn any reliable conclusions on the basis of such material.

I must confess that the intermediate result of our joint work was a bit scary: a collection of bushy trees of endless variations, reminiscent of dragons with seven heads from fairy tales. There was still a lot to be done. By adorning the variations with detailed verbal comments and cutting some of the excessively developed branches, I have tried to make the final result easy to read and understand.

I should now say a few words about the general structure of the book.

The first chapter presents some general topics that are typical for the research process, both during the game and in the laboratory.

In Chapters 2 to 4 I have focused on three concrete patterns that can make an attack possible.

The final three chapters have a more general background. They are built up around three of the most intriguing themes from the whole of chess history. Each of these subjects of investigation is taken from a different century.

There is of course a limit to what can be covered within one reasonably sized volume. Nevertheless, I hope that I have managed to uncover some of the most interesting Secrets of Attacking Chess.

Secrets of Pawnless Endings, Nunn John - download book
This book is the sequel to Secrets of Rook Endings, and is a continuation of the theme of that book. Secrets of Rook Endings represented an
Mating the Castled King - download book
Right from when we first start to play chess, we are taught quick knock-out ways of checkmating our opponent's king. We quickly learn Scholar's
1.d4 d5 2.c4 Bf5 - Keres Defence - download book
Why the Keres Defence? Not only in order to pay homage to the Estonian Grand Master but also because Keres was the first to adopt the sequence of
Secrets of pawn endings
The extraordinary complexity of chess is familiar to every player. When most of the pieces are on the board, the number of legal moves is
Information
Users of Guests are not allowed to comment this publication.