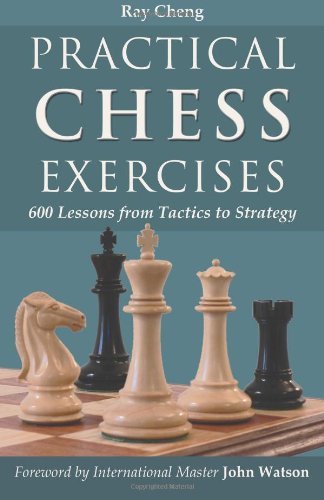 Ray Cheng loves chess. I know this because he has been my student for several years and his enthusiasm has never waned. Nevertheless, when Ray first mentioned that he wanted to write a book of training exercises for the amateur player, I was skeptical. The chess market has its share of training material, including an abundance of books with collections of positions to be solved. But as Ray unfolded the plans for his work, I became more and more intrigued. He had come up with several innovative ideas, methods that offer the reader a genuine opportunity to acquire the skills needed for actual play.

First, instead of sorting the problems by themes, he mixes them together so that the student has no advance idea of what kind of position he is dealing with. Is there a simple checkmate, a complex tactical sequence, or a purely strategic solution to the position? Or perhaps a mixture of these elements and particular themes? With hindsight, Ray's point is obvious: this is precisely the situation that a player is confronted with in a real game! When considering your next move, you're on your own and have to decide what to play based upon your own unassisted thought process. Astonishingly, I can think of no other book that poses its problems in this way without hints about how to proceed. For example, books that ask you to find a checkmate in one, two, or three moves telegraph their intentions, whereas even books that ask 'What's the best move?' tip you off about the relevant themes and choices. By contrast, Ray's book forces you to do the most important thing of all: think for yourself.

A related problem is the degree of difficulty. Most exercise books move from easier problems to more challenging ones. Others explicitly indicate to the reader how hard a given position is to solve. Once again, this is not information imparted to a player in the real world of competition. Therefore Ray has done what seems obvious in retrospect: he has not only chosen a wide range of problems from elementary to advanced, but has randomized the order of the exercises with respect to their complexity and ease of solution. Again, this simple arrangement of material is seldom if ever to be found in other chess books.

These innovations apart, what about the problems themselves? Ray spent over a year compiling examples, drawing in large part from an unconventional source: the games of amateurs. These were typically played on the Internet, where I venture to say that the majority of games by serious players will soon be contested. Those involved in playing games via the Internet should gain insight into their typical tendencies and shortcomings. They are not so different from the ones that show up during over-the-board play, and only applied study can adequately address and correct them. Ray's understanding of the ways in which amateurs think allows him to touch upon areas of misunderstanding and oversight that don't occur to the masters who usually write exercise books. In most cases they toss together tactical examples from master games, without particular thought to the amateur audience. There could hardly be a greater contrast to the effort that Ray has invested in the book before you.

Chess authors are constantly claiming that they don't merely impart information, but also teach you how to think. As a teacher, I am painfully aware of how seldom that is the case. Truly making one's own decisions without depending upon others' advice is usually the last step in becoming a strong player. But if you carefully work through the book before you, you will inevitably improve in that regard, and gain the satisfaction that comes from greater mastery of the game.
John Walson
International Master
Author: Ray Cheng
Title: "Practical Chess Exercises: 600 Lessons from Tactics to Strategy"
Released: 2007
Format: rar/pdf
Quality: good
Number of pages: 214
Size: 5 Mb

Imagination in Chess: How to Think Creatively and Avoid Foolish Mistakes - Download book
Chessplayers possess plenty of manuals on tactics, quite a few textbooks on strategy, and stacks of books on the opening and endgame. Yet there
More Chessercizes - Checkmate!, Bruce Pandolfini, download
What's chess all about?    Quick answer: Get the enemy king as fast as you can. Effective aggression, or forcing mate in as few moves as
Winning Chess Tactics Illustrated - download book
With this bit of preliminary shaping up, you are ready to tackle the 320 ensuing positions in WINNING CHESS TACTICS ILLUSTRATED. You will come
The Week-End Problems Book - download book
Old collection of problems with answers on the theme of the endgame.
Information
Users of Guests are not allowed to comment this publication.