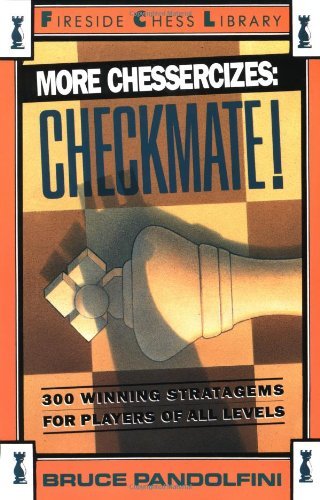 What's chess all about?

Quick answer: Get the enemy king as fast as you can. Effective aggression, or forcing mate in as few moves as possible, is the point.

The examples are arranged in five chapters, each chapter increasing by one the number of moves required to force mate. Chapter One contains only mates in two, Chapter Two mates in three, and so on through Chapter Five, which offers mates in six and, finally, seven moves. A further ordering occurs within each chapter, where the easier problems come first and are followed by the harder ones.

All answers are given in algebraic notation, which is explained in the section following this introduction.

For the defender, the main-line defense is the one that lasts the longest: Surviving for four moves is better than losing in three. If several variations are equal in length, the main line is the most natural one, the one to be considered first.

To get the most from this book, try to solve the problems from the diagrammed positions without setting them up on a chessboard. This lets you practice visualizing chess moves in your head, which is what you do when actually playing. (Your opponents won't let you move the pieces around to see if your ideas really work!)

If you can't solve a problem after several minutes, then set up the position on an actual chessboard. But even with real pieces in. front of you, you should still try to find the solution without moving anything. Only after you've tried to discover the right moves this way should you move the pieces. Simulate game conditions. Pretend it's against the rules to take a move back or to experiment with a variation to see if it works. This can help you develop your analytic skills and improve your play more quickly. No pain, no gain.

If you're not a born killer, you can learn how to be one in chess. Solving the checkmate exercises can sharpen your tactics and aggressive instincts while increasing your stockpile of patterns and related weapons. You learn the potential of the pieces individually and in combination with others. Progressing through Chessercizes: Checkmate!, you'll solve harder and deeper problems, expanding your capacity to see ahead and to exploit similar situations in your games.

Chessercizes: Checkmate! is based on situations that can occur in the opening or early middlegame of your actual games. Play through the book the first time for fun, noting how long it takes to solve each problem. On a second reading, try to beat your earlier record by solving each problem faster. Later, whenever you want to sharpen your play, try re-solving a few problems in Chessercizes: Checkmate! Ideally, you'll want to determine the answer instantly. Spotting patterns quickly is what distinguishes strong players, and practicing, in this way, with diagrams, is one of their secrets.

Practical Chess Exercises: 600 Lessons from Tactics to Strategy - download book
Ray Cheng loves chess. I know this because he has been my student for several years and his enthusiasm has never waned. Nevertheless, when Ray
Imagination in Chess: How to Think Creatively and Avoid Foolish Mistakes - Download book
Chessplayers possess plenty of manuals on tactics, quite a few textbooks on strategy, and stacks of books on the opening and endgame. Yet there
U.S. Chess Problem Anthology, Holladay Edgar - download book
Huge collection of chess problems. The book contains 241 chess problems by professional composer. The authors identified more than 500 interesting
The Week-End Problems Book - download book
Old collection of problems with answers on the theme of the endgame.
Information
Users of Guests are not allowed to comment this publication.