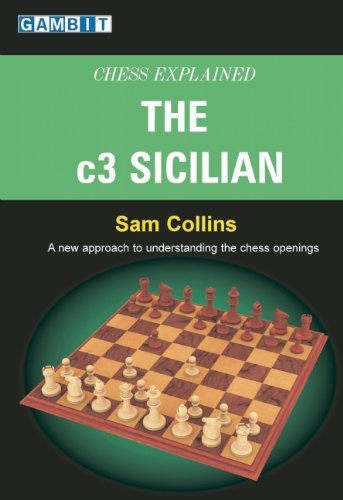 The Chess Explained series seeks to provide the reader with a basic understanding of an opening line through the use of 25 games, annotated with relatively few variations but plenty of verbal commentary. I think the c3 Sicilian is a pretty good candidate for such a format, for two reasons:

1) There is less theory than in, say, the Najdorf Sicilian or Griinfeld. In extremely sharp openings, the assessment of many positions depends critically on specific and often complex variations. The opening in this text, however, lends itself to verbal explanation because the positions are inherently more rational than in those sharper lines.

2) There is quite a lot of thematic overlap between individual variations - positions with an isolated queen's pawn or e5-spearhead, for instance, come up extremely frequently, and knowledge is readily transferable from one line to the next.

Starting Out - Closed Sicilian - download book
Once one has some experience of the Closed Sicilian, it is perfectly possible to employ both 6 f4 and 6 Be3. After all, good general understanding
Sacrifices in the Sicilian (2nd edition) - download book
In a recent survey of the twice-yearly Yugoslav publication Informator, I discovered that one quarter of their published games over a five year
Beating the Sicilian, Vol. 1, 2 & 3 - download book
This is not a typical Batsford opening book. Consequently the introduction is rather longer than it might have been, in order to explain the
Attacking with 1.e4, Emms John, 2001 - free download book
This is a book aimed for those who want a opening repertoire based on 1 e4. Moreover, this is an openings book for those who have neither the time
Information
Users of Guests are not allowed to comment this publication.