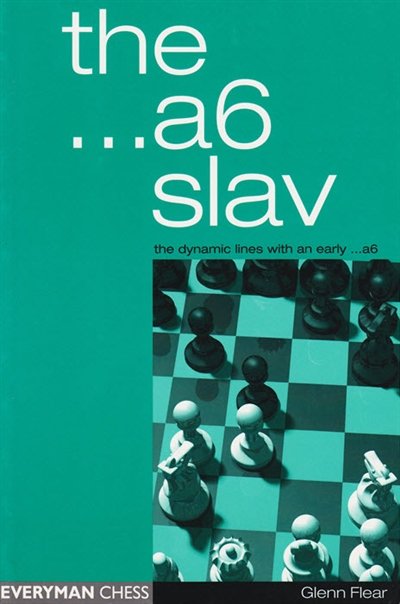 Over the last few years interest in the a6-Slav has grown exponentially.

It is amazing that traditional openings are losing their advocates because so many are switching to 4...a6. Why is this little move so tempting? Even Kasparov can't resist!

Erie Pric, a French CM known for his thorough opening preparation, approached me with the idea of writing a book on his pel variation. He then opened his files to me and added significant original analyses, comments and ideas throughout this volume. He has himself introduced many novel ideas into practice as you shall see in the following pages!

Our combined efforts have produced the first major work that I know about on the Slav with ...a6.

The variation is so modern that the world can't settle on which name to give it! Tn honour of the pioneering Moldavian master, some call it the 'Chebanenko' or 'Moldavian'. Others . agree with this partially, but only when followed up with ...g7-g6. The 'Chameleon' is an appropriate name in that the defender changes his approach dramatically depending on his opponent's strategy, just as a chameleon changes his camouflage effortlessly.

I have setded on the The Slav with ...a6 (or occasionally The ...a6 Slav1) which - essentially describes where this works begins. Whatever the name, this opening system burst out of obscurity ten years ago to now be the height of fashion at all levels.

Amongst household names Shirov, Bologan (who is Moldavian) and a young Dreev played this way in the early to mid-1990s. Many dynamic Russians have followed, with Morozevich, Bareev, Motylev, Rublevsky and Volkov springing to mind. Other leading Europeans included Ivan Sokolov, Kiril Georgicv.Jeroen Piker, Movscsian and Mikhail Gurevich.

Closer to home Hodgson, Short and the late Miles have been England's main practitioners, and French star Bacrot has now converted to the cause. Furthermore, with the world's number one giving it his seal of approval, the a6-SIav has to be taken seriously!

Things have certainly changed since Victor Korchnoi famously awarded 4...a6 a '?' in his annotations. So what's the point behind the move?

Otherwise Black can simply expand with ...b7-b5 and hold back with the bishop, which may even stay on the queenside.

The pawn on a6 covers the b5-square and prepares the pawn advance and sometimes even to b4, attacking the knight on c3 and cramping the queenside.

Finaily we can think of 4...a6 as a waiting move, obliging White to show his hand, whereupon Black reacts accordingly. Black's king's bishop is a case in point: some like to fianchetto with ...g7-g6 and others to develop classically with ...e7-e6 (...Nbd7 and ...e7-e5) followed by ...Bd6 or ...Be7. Then again, in some variations this bishop goes to b4 or even c5! Don't get confused, just accept that flexibility is one of the traits of Black's set-up!

Despite all the focused attention, the theory of many lines is still evolving and there are still great opportunities for original thinking. The variations arc rich and dynamic and we shall see that Black has a solid shell of pawns that can be used as a foundation for active counter measures. Solid if need be, but offering chances of playing, for a win.

Clearly White has been unable to refute 4...a6 and has tried many ways of coping with this variation. The first nine chapters detail White's attempts at striving for an ppening advantage from the fundamental position following 1. d4 d5 2. c4 c6 3. Nf3 Nf6 4. Nc3 a6.

In Chapters 10 and 11 White varies earlier by delaying the development of one of the knights and in Chapter 12 we deal with various attempts to avoid the a6-SIav via the English or Reti openings. The popularity of these systems is evidence indeed of the strength of 4...a6!

The book has my sole name on the front cover, but apart from Eric I was also helped by my wife Christine, but I hasten to add that I take personal responsibility for any oversights!

Hopefully you will find rhe book worthwhile and will, as a result, better understand this 'little move with big intentions'...
Glenn Flear

The Chebanenko Slav According To Bologan - download book
This book is dedicated to Vyacheslav Andreevich Chebanenko, the patriarch of Moldovan chess, and my trainer and teacher. In working on this book,
Open Ruy Lopez, Flear Glenn - download book
The Open variation of the Ruy Lopez (or Spanish) starts with the moves 1. e4 e5 2. Nf3 Nc6 3. Bb5 a6 4. Ba4 Nf6 5. 0-0 Nxe4
Play the French, Watson John - download
With the recent explosion in chess theory, a complete volume covering all variations of the French Defence would require some 1500 pages at least.
Attacking with 1.e4, Emms John, 2001 - free download book
This is a book aimed for those who want a opening repertoire based on 1 e4. Moreover, this is an openings book for those who have neither the time
Information
Users of Guests are not allowed to comment this publication.