How to Play the English Opening - download chess book 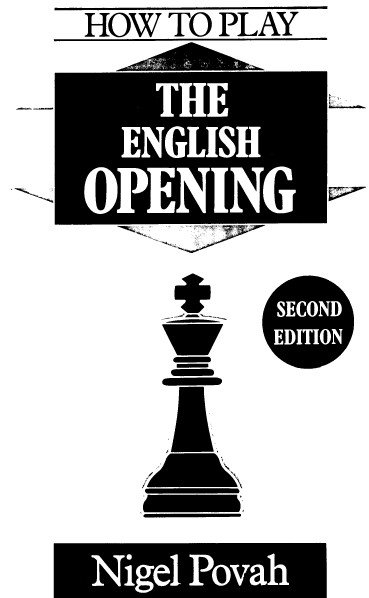 The English Opening is without doubt one of the most misunderstood of all chess openings. The move I c4 conjures up a variety of different attitudes, particularly amongst the uninitiated. To some people I c4 suggests a rather dull and uninspiring game, while others visibly wince at the thought of trying to fathom the mysteries of this 'strange' opening. But this does not need to be the case and it is hoped that this book will help to dispel some of the so-called mysticism surrounding this intriguing opening. So let us start by asking the question...

Why Play the English?

The short answer is, 'because it must be good for your chess!'. There may be many reasons why you have decided to play the English. You may have felt bored with 1 e4 or I d4 and want a change. You may feel that the English will expose you to more positional themes, thus enabling you to develop a better grasp of positional play. Or, you may take the view of the author, that the 'complete chess player has a good understanding of all openings and positions. One only needs to examine wide opening repertoires of the top Grandmasters to confirm this view. Before considering some of the basic themes that prevail in the English, it might be interesting to note a few historical facts.!

The opening move I c4 was first played by the unofficial World Champion Howard Staunton in 1843 against Saint Amant. His, profound understanding of opening theory enabled him to subtle advantage of playing a Sicilian Defence, and his continued with 1 c4 led it to be named 'The English'. However, despite Staunton's blessing, 1 c4 continued to be treated with suspicion by the romantic classicists, who believed that White should occupy the centre with a pawn on his first move. But gradually over the years the English has gained many advocates, and it now features in the repertoire of most Grand masters. In fact during the last 50 years 1 c4 has often been considered a viable alternative to 1 d4 or I e4. However, this transition is restricted mainly to the top echelons of chess because of the poor theoretical coverage available to the lesser player. For instance, the tenth edition of Modern Chess Openings, published in 1965, devoted less than ten pages to the English compared with 65 on the Sicilian! Recently though, this trend has been corrected, with the publication of a number of new works on the subject (including this one) which have attempted to prove the English has come of age after 140 years!

Chess Explained - The English Opening - download book
An excerpt from the first chapter    In the early 1970s some players started playing a new formation called the 'Hedgehog', going
Symmetrical English - download chess book
The Symmetrical English (1. c4 c5) is an important part of chess theory, and is played at every level of the game from World Championship to club
How to Play Good Opening Moves - download book
The beginning phase of a game of chess is called the opening. What is the relative importance of the opening as compared to the middlegame and
Information
Users of Guests are not allowed to comment this publication.