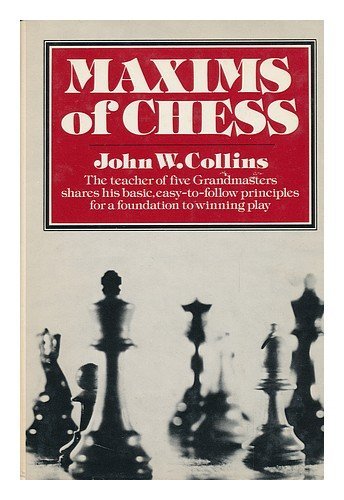 The book has fifteen chapters. Six on the pieces: King, Queen, Rook, Bishop, Knight, and Pawn nine on other aspects.The Endgame, The Middlegame, The Opening, Tactical Play, Combinations, Positional Play, Exchanging, Strategy, and A Philosophy of Chess. Each of the first fourteen chapters has an introduction, a maxim, a diagram, an example containing an entire game, part of a game, or an endgame study, all with annotations, and the names, places, and dates connected with the example. The fifteenth chapter is an essay on the game.

The introductions to the chapters on the various pieces describe the value, moves, powers, and underlying characteristics of the particular piece.

The maxims are, I hope, witty and wise. They are taken from the classics, chess literature, famous and not so famous players, and from my own store of quotable quotes (the unattributed maxims are my own). Some have been slightly paraphrased, without damage to their essence. All are linked to the examples beneath them and dramatize a point which is instructive and can be remembered.

The diagrams precede the examples and show the position in the game or study just prior to the move which brings out the main feature of the example. When it was impossible or inconvenient to give the number of the initial move, the device "White to Move" or "Black to Move" has been employed.

There are 140 games, parts of games, or endgame studies included in the examples. All are annotated, with varying degrees of thoroughness, according to what seemed appropriate. The great majority of the games or fragments were played by world champions, grandmasters, international masters, and masters. Most of the games are of recent vintage, some are old favorites. Every one provides excellent study material. The endgame studies, while few in number, are uniquely suited to illustrate a theme, or the power of a piece, and sometimes even bring out the humorous side of chess.

Naturally, some of the examples are interchangeable: one in the chapter "The King" may fit as well in "The Endgame"; one in "Exchanging" may fit as well in "Positional Play"; one in "Combinations" may fit as well in "Tactical Play"; and so on. But while an example might be equally at home in another chapter, none are misplaced where they appear. The chapter "Exchanging," incidentally, comprises an addition to chess literature. To the writer's knowledge, only Nimzovich and Pachman have contributed specific chapters in their books to this subject, and those are less substantial than the one to be found here.

The initials of players' names have been largely omitted, except when confusion might otherwise result. So too have the names of tournaments. In all but a few cases dates have been verifiable; when not, the error is likely to be slight.

And, finally, the last chapter, "A Philosophy of Chess," is an outline of the origin, development, and spread of chess. The opinions held of it by great men. A tentative attempt to probe its innermost nature. Some thoughts on what and how to develop ability and the mill through which an ambitious player must go. An inquiry into the Fischer Boom. And where do we stand today and what does the future hold?

Fundamental Chess Endings - download free
Fundamental Chess Endings is primarily concerned as a textbook and is divided into 12 chapters with exercises. We start with the basic mates and
Improve Your Chess Pattern Recognition: Key Moves and Motifs in the Middlegame
Plenty of scientific books have been written about pattern recognition; this will not be one of them. Sure enough, this book is about patterns,
Pawn Endings, Cvetkov Alexander - download book
Not every game lasts until the endgame; but even in the heat of the chess struggle, you have to think about it. Thus, for example, even in the
Positional Chess Sacrifices - download book
Excerpt from the introduction to the book    Some series of moves stand out from the expected trend of a chess game. They are surprising
Information
Users of Guests are not allowed to comment this publication.