ChessOK » Chess news » The friendly match between Israel and India

The friendly match between Israel and India 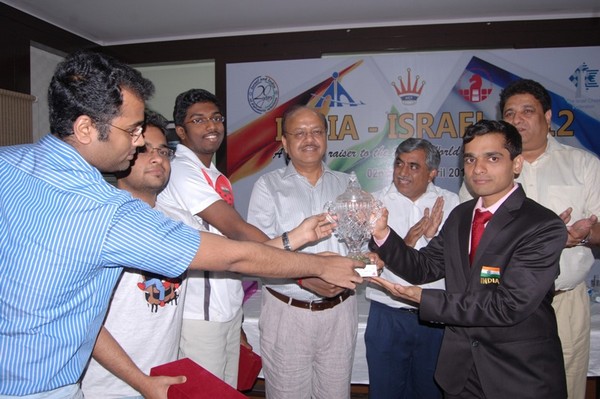 The friendly match between Israel and India teams completed recently. It was won by the home team (the tournament was held in New Delhi). The total score was crushing 29.5-18.5. Neither Anand nor Gelfand participated in the match for clear reasons. Israeli fan were upset but they hope Boris Gelfand will revenge for this annoying loss. There were 4 players in each team. The blitz, fast chess and blind chess were played.

Match for the World Champion - Anand - Gelfand - 2012
European Senior Teams Championship 2012
European Senior Teams Championship 2012 has completed today. It was won by the Russian team "Russia-1". The tournament was held in Slovenia in
Women's World Chess Team Championship 2013 Online
Women's World Chess Team Championship 2013 is starting on 3 March 2013 in Astana. Ten teams from China, France, Georgia, India, Kazakhstan,
Candidates Tournament 2013 Online. London
The 2013 Candidates Tournament will be held in London from 14 March to 2 April. This tournament will be the strongest in the whole history of the
Information
Users of Guests are not allowed to comment this publication.