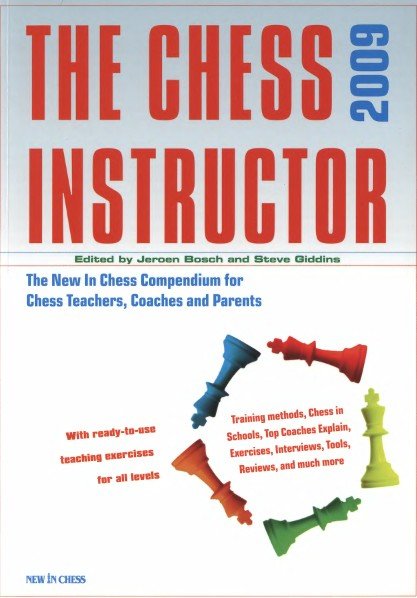 Throughout its long history, chess has experienced ups and downs, periods of extreme popularity and periods when chess activity declined. At the beginning of the 21 st century, there are plenty of challenges facing chess, but anybody who is familiar with the current state of the game knows that the demand for chess coaching has never been greater. For most of the 20th century, serious chess coaching was largely the exclusive province of the Soviet Union, whose network of chess clubs and experienced coaches produced a veritable conveyor belt of strong chess players. With the collapse of the Soviet Union in 1991, their players and coaches began increasingly to travel to the West, and the 'gospel' soon went with them. The publication of Mark Dvoretsky's series of books opened many Western players' eyes to the potential and methods for successful chess coaching.

At the same time, many educationalists were becoming increasingly convinced of the value of chess as an educational tool in itself. The disciplines of logical thinking, concentration, objectivity and independent decision-making are extremely valuable in themselves in almost all areas of life, and chess is an excellent medium by which to teach them. Thus, increasing numbers of schools began introducing chess to the school syllabus, and this trend continues to this day. As I write this Preface, I have seen in the past 24 hours that Bulgaria has become the latest European country to add chess lessons to the standard school curriculum.

With such growth in chess coaching and teaching at all levels comes an increasing need for good didactic material, and information that would-be chess coaches can use in their work. Precisely because of its relatively recent vintage, chess teaching does not have a substantial literature to which coaches can refer, and they face a constant battle to develop effective working techniques and instructional material.

It is to fill this need that The Chess Instructor came about. In the present volume, which is intended to be the first of an annual series, you will find a large number of articles, by different authors, on various aspects of chess coaching.

These range from Mark Dvoretsky, whose focus is on developing already very strong players, of grandmaster level, to authors such as Richard James, who has spent some 35 years teaching chess to young children.

One of the most successful chess coaching programmes in recent years has been in The Netherlands, the results of which can clearly be seen in the current young generation of Grandmasters, headed by the 2008 Dutch Champion, the 22-year old Jan Smeets. For a number of years now, chess teaching in The Netherlands has been based upon the famous and highly successful 'Step-by-Step' Method, developed by Cor van Wijgerden, the basics of which are explained in this volume, by Van Wijgerden himself. And no mention of chess coaching in The Netherlands would be complete without the indefatigable Karel van Delft, whose coaching programme in the Apeldoorn region has benefited many thousands of young players. In this book, Van Delft presents his unique 'analysis questionnaire', used as a tool to help young players draw the appropriate lessons from their games.

Setting up a chess teaching programme in schools is something that many people have attempted to do, and which is likely to continue to be a growth area in the future. In this respect, we are sure all would-be coaches will benefit from reading Jan van de Mortel's refreshing and honest piece, 'Top ten things to remember as a chess teacher'. Meanwhile, you may have ambitions to set up, from scratch, a nationwide schools tournament, with 70,000 participating children. An unrealistic pipe-dream? Don't be so sure; that is precisely what Mike Basman has done in Britain, and in a revealing interview here, he explains how he managed it.

The Chess Instructor aims to be an indispensable tool for chess coaches at all levels. We want the book to be practical, relevant, down-to-earth and, above all, useful. We believe that in this first volume, we have brought together a large amount of highly interesting and useful material, for chess teachers at all levels. One of the main messages we wish to convey is that teachers of different levels can all learn from each other, and for this reason, we hope that all of the material in this book will be of interest to coaches, at whatever level they operate. Pedagogic principles are universal, and the ability to teach well is as important when coaching grandmasters as when working with beginners. Likewise, these principles are equally important to professional coaches and volunteers, and we therefore believe that The Chess Instructor should be equally useful to all. Whether your focus is a potential World Champion, or whether you are just looking for an effective way to teach seven year-olds how the little horse-shaped piece moves, we are sure you will find the material in this volume helpful.
Steve Giddins
Authors: Bosch Jeroen & Giddins Steve
Title: "The Chess Instructor"
Released: 2009
Format: djvu
Quality: good
Number of pages: 218
Size: 8 Mb

Chess Exam And Training Guide: Rate Yourself And Learn How To Improve
I have been coaching chess in the United States since 1991. Over the years I have worked with 100's of players of various levels. I have held
Chess Highlights of the 20th Century - download book
Chess Exam and Training Guide: Tactics: Rate Yourself and Learn How to Improve
This book is designed lo provide information on understanding tactical ideas and evaluating tactical skills, as well as various training methods.
New In Chess: The First 25 Years - free download
It is probably just as well that I never married, as remembering anniversaries has never been my forte. Thus, it came as a complete surprise when
Information
Users of Guests are not allowed to comment this publication.